Notice: Undefined offset: 2 in /home/absalogi/public_html/wp-content/plugins/visitors-online/visitors-online.php on line 438
 UP CLOSE: Lawyer Ochillo Ayacko: Take this to the bank- come 2017, Obado will not be the governor of Migori. | Migori News

UP CLOSE: Lawyer Ochillo Ayacko: Take this to the bank- come 2017, Obado will not be the governor of Migori. 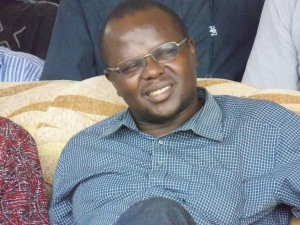 By Scophine Aoko Otieno (The Nairobian)

As Sports minister, lawyer Ochillo Ayacko elicited giggles when he announced that Kenya would bid to host the Olympic games. The former chairman of the Kenya Nuclear Electricity Board told SCOPHINE AOKO that Migori Governor Okoth Obado has no business being in office in 2017

Absolutely. I am very much in the race in 2017. I believe I have what it takes to steer the county into greatness because so far, nothing much has been done and people are still languishing in poverty.

I will initiate programmes that will lead to economic growth of Migori County through a strategy that will root out corruption and offer consultative and team leadership, unlike the incumbent who is moving around trying to undermine elected leaders because of his inferiority complex.

I am not a violent person. It just happens that when I started my politics, we, including my party leader Raila Odinga, were victims of violence from Kanu, the then ruling party. We were vilified, victimised and attacked all over the country and politics was only for those who were able to stand firm.

This called for bravery and courage. So, when the true perpetrators of violence come and find us to be unbwogable, they label us as ‘violent,’ yet we are actually the victims.

If ODM awards the party nomination certificate to someone else, will you defect

I will get the nomination certificate.

He is an absolute failure, a living disaster, a disappointment to the great county of Migori. He has developed nothing, yet the devolved functions of a county government are momentous.

If you asses his performance against those functions, you will realise he has not done any better than the authority that we did away with for its non-performance.

Take a look at health, local roads and other sectors; they are probably worse than they were under the central government. I am certain that the current county government does not even have an economic blueprint.

The incumbent’s failure is not news to me, because while I was an MP for Rongo, the late Omamba and I built a school in his village called Chunge Secondary School and made him the principal. He failed us miserably, because, instead of staying in school and improving performance, he was busy doing his own things as students absconded from school, thus he had to be removed.

That is rubbish. He has been on record saying he has given people cassava and banana seedlings. In the 21st century, those are not crops you can brag to have introduced to the people. You must give people cash crops that can generate agribusiness and earn them good income.

When he talks of cassavas and bananas, I think he has gone bananas! Migori has good climate, hence it needs someone serious who can capitalise on that to improve agriculture.

Unfortunately, he is not a serious person. Tobacco is dead, Sony Sugar Company is on its knees, while the mines have been infested by self-centred individuals. Migori needs help and I cannot wait to see the current governor ousted.

Why do you think he has underperformed

Instead of working for the people, he and his cronies are busy working on their personal projects. He has only built roads that lead to his home, office or businesses. He focuses on trivial things.

The other day, he was in Nyatike trying to convince the people there that it is the sitting MP and not him that has collaborated with a private investor to fence the mines, a move that would have seen thousands of miners lose their source of livelihood. I mean, what serious governor does that

He was supposed to go there with plans on how to improve mining in Nyatike, not to deny anything and play politics.

What are your plans for the youth and women

I am privy to the fact that women and youth form the majority of the population the world over and not only in Migori County. Unfortunately, the face of poverty is feminine and youthful. That is why many who are suffering are women and the youth, and this is so because they lack opportunities and resources.

I believe the most sustainable approach is to ensure the economy of Migori is growing, thus providing opportunities and resources for women and the youth. This can be achieved by among other things; ensuring that direct foreign investment is attracted into the county.

You were a Member of Parliament for the then Rongo Constituency for more than a decade and also became the Minister for Energy. Your candidature for the gubernatorial seat is being pegged on your performance as a legislator and word has it that there isn’t much to write about…

When I became MP for Rongo, I made sure that every sub-location had at least one public day school to ensure the transition rate from primary to secondary school remained at 60 per cent. Day schools are affordable and accessible. I also made sure that every sub-location in the larger Rongo Constituency had electricity. I ensured fishing bays in Nyanza, Coast and Kenya at large, had electricity. For sugar farmers, I was responsible for the enactment of the Sugar Act 2001, which basically gave farmers a bigger say in the sugar industry.

Pundits argue that you, Mark Nyamita and Anne Anyanga must work together and if possible, front and support one candidate to take on Obado in next year’s elections…

One thing that I am sure about is come 2017, Obado will not be the governor of Migori. I can say with certainty that he will not clinch the seat. You can take that to the bank.

4 thoughts on “UP CLOSE: Lawyer Ochillo Ayacko: Take this to the bank- come 2017, Obado will not be the governor of Migori.”