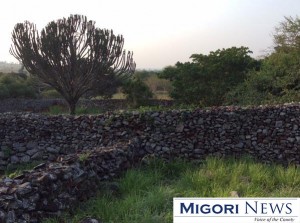 By Nick Oluoch
Residents and visitors to Migori County can access a wide range of tourist attractions as well as recreation centres where they cans spend their free time as well as use for family day outs.

These facilities, all not more than two hours from the County headquarters can all be easily be accessed and provide services as good as those found in other more illustrious venues across the country. They include:

Thim Lich Ohinga.
This is perhaps the most known and most intriguing of all the tourists attraction destinations in the county.

A Luo word loosely translated into a frightening dense forest and a fort has for sometimes now elicited just as much interest as curiosity from adventurers, archaeologists, and architectures alike.

It is made up of stone walls ranging from a meter to about four and a half meters, this structures not only epitomes the art of architecture in the olden days, but also has got a near perfect combination of the cat: beauty, strength and balance.

Situated about an hour’s journey by road from Migori town, deep into the west of the country towards the shores of Lake Victoria at Sori, this historical site has almost striking resemblance to the ruins of the great Zimbabwe in southern Africa.

According to Silas Nyagwethi, a curator at the fort, the fort is the county’s version of the great Fort Jesus, a structure which attests to how the earlier man, just like the current one continuously sought to secure his habitat.

“And in this case, they almost managed to be secure from all forms of adversity” Silas explains about the giant self-imposing stone structures which was built in the 15th century but still with the ability to send our best architectures scratching their heads for explanations on how it was made.

Thim lich has always been a source of different researches, none yet to come up with the exact explanation of how the ancient man, always rebuffed for his perceived ‘backwardness; could have come up with a near perfect art.

The art used to join the rocks to form the protective but intimidating wall surrounding the scene is incredible, made more even better by the fact that it has stayed like this for over four hundred years.

The entrances are very short, less than a meter tall to ensure that by the time the enemy got inside, he was less stable as he was still bending.

The guards who were by this time waiting in a slightly raised place would then easily overpower him.

Thim Lich Ohinga is about hundred and forty meters in diameter, quite a large home. Inside, there are four forts going by the names of Kochieng, Kakuku, Kokech and Koluoch combine to make the Thim Lich Ohinga.

The sandy beaches of Lake Victoria
Migori County also happens to border the biggest fresh water Lake in the world: Lake Victoria. This means that both residents and visitors alike can spend time at the sand beaches, just two hours from Migori town.

Having stayed unutilised for years, the beaches have over the past two years witnessed renewed interest as hoteliers scramble for them as demand for beach hotels in the region continue to grow.

Already, there are several magnificent beach hotels within the county, among them Lake Victoria Beach Resort and Supanova hotels in Sori town as well as the Matoso Sea lodge and Restaurant in Muhuru bay.

According to Jared Wigina, the Director of Lake Victoria Beach Resort, it is strange that people from the region have for years preferred to go and holiday in Mombasa without realising that they are leaving a similar destination at home.

“Our people have to realise that they can enjoy their holiday on the beach without having to cover over a thousand kilometres to get it in Mombasa,” he says.

He adds that just across the border into Mwanza town in Tanzania, a number of beach hotels are always fully booked and a large number of the clients are residents of the county.

To give the visitor the wholesome feeling of being in the coast, the hotel owners have also ensured that coconut trees are planted along the beaches giving a perfect creation of the coastal region.

Beaches surrounding Lake Victoria Beach Resort and other beach hotels today are covered in Coconut trees with strong breeze from the lake giving the visitors a perfect coastal feel.

The results have also seen several foreigners crossing over to spend their weekend and holidays within the hotels with Lake Victoria Beach Resort frequented by Ugandans and Tanzanians businessmen who prefer it because if its serenity.

“We have been used to Kenyans crossing over to Mwanza in Tanzania for their holidays and so this is a new one,” Wigina says adding that the trend is expected to continue as more hotels are put up within the beaches in the region.

He however says lack of better roads especially from the major towns into the beaches has somewhat been a hindrance to the hoteliers as it limits the number of clients who can make it to the hotels.

It is also possible to witness the great wild beast migration from Maasai Mara to Mara Serengeti across the River Mara just a few kilometres from the county.