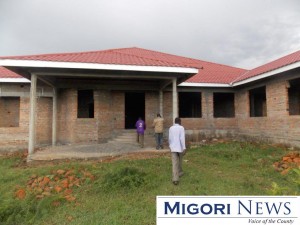 The tourists hotel being set up at Macalder town, Nyatike constituency by area legislator Edick Anyanga.

The boost in infrastructure development by the county government especially the laying down of C13 tarmac is set to positively impact on tourism.

The boost will change Migori tourism attraction centers and revive hotel business to cater for foreign and local tourists.

The new road which will connect Migori from Lake Victoria at Muhuru Bay through headquarters, Kehancha and in Nairobi will ease transport.

It will help increase potential of Migori which lies centrally as the conduit to tourists heading to Ruma, Maasai Mara and Serengeti National parks in the region.

“Tourists often travel through the county to these destinations without stopping for sites and hotels here, these change of infrastructure may boost their stay,” Jack Otieno, a hotel manager said.

These plus the county government taking root after devolution is good news to help revive the hotel industry.

This will open up prime property land and hotels which are rated at third to five star along the highway and Lake Victoria basin.

Among hotels to benefit from this is one being established at Macalder in Nyatike by area MP Edick Anyanga.

The hotel which was constructed to attract tourists heading to Maasai Mara, Ruma, Serengeti National parks and Thim Lich Oinga has been laying in disuse.

During his campaign Anyanga said the county has a huge tourism potential which saw him built the hotel.

“I chose to invest in hotel business in the county and not outside home because is believe we can have a boost in the industry,” he said.

Investors have been banking on the new infrastructure if the number of new hotels springing up in the county is anything to go by.

This will give residents experience of high end destinations without travelling outside the county for them.
The trend has seen hotels coming up along the beach like Supanova and Lake Victoria Beach Resort which will boost the county ratings.

Jared Wigina the Director of Lake Victoria Beach Resort at Sori beach said he bought the five acre land in piece of land in Sori back in 2002 and build the hotel by August 2011 with major returns.

“I have been hitting full booking of space and most clients are locals who have shown the huge potential in tourism,” Wagina said.

Wagina said that the hotel receives business people and tourists from Uganda and Tanzania a trend he believes will continue as more hotels are put up within the beaches in the region.

He said they will get a major boost with infrastructure development and tarmac of the road which will trap tourists across the lake in Mwanza and Entebbe towns where hotels are always fully booked.