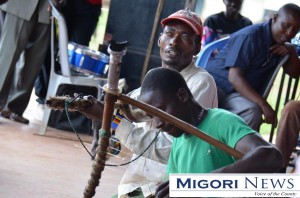 Everyone who has ever attended a Kuria traditional dance will note something unique. Almost all start with the highest key possible and maintain the same tempo to climax.

This is different from many other Kenyan traditional dances that reserve the high keys for the climax.

The Kuria from Migori County are regarded as one of the minority groups of Western Kenya,

These Bantu speakers are famed for about seven traditional dances.

Just like many African communities, music and dance make perfect accompaniments for almost every traditional ceremony and rite of passage. That is why the Kuria would have various dances designated for different traditional rituals.

It is interesting how these dances were named. Most of the names are from the musical instruments that accompany them.

Embegete was performed during high profile social functions like installation of elders, marriage of elders and any serious event involving senior men and women in the community.

The name embegete or egetomo was derived from a special drum that is hollow and strapped with a cow hide on the top. It is the most prominent instrument in the dance hence the name.

Verge of extinction Egetomo was originally a shorter version of the embegete, but is most likely nowadays to be a round bucket or tin covered on both sides.

It is stood upright and played on the topside only.

It bears close semblance to the Iteso’s atenusu. The drum is cord braced and is warmed over open fire to tune
According to Chacha Nyamohanga, 85, embegete is on the verge of extinction.

“The last time I witnessed it being played was about 40 years ago and since then it has disappeared from our cultural performances,” says Marwa.

Embegete is a very sacred dance that is staged by elders only.

“When the drummer of embegete starts the beat, even the lame among the elderly will struggle to rise to the occasion,” remarks Chacha.

Though other members of the community might argue that embegete was open for even young boys and girls, Chacha says it was highly esteemed and only meant for elders.

No young people were allowed to participate in the dance.

However, given the changing times, today young men and women would not hesitate to join in.

“But this was never allowed during the days of yore when embegete was what we believed it was,” says Chacha.

“It is a silent dance played without any lyrics. The drums do the talking,” he reveals.

The swaying of the head, juggling of the feet, rhythmic twist of the waist and well-choreographed turns make the dance lively and entertaining.

At a change of the tune of drums, the dancers lock arms on their chests as they hop in circles.

The moves and choreography were very unique that only those specially trained would do it perfectly.

Embegete dance was also commonly performed at an elder’s wedding, and sometimes on other occasions during installation of new elders and even during appeasing of ancestors.

The dress code of participants was the same as for ibirandi dance, which is another dance graced by percussive gourds (ibirandi) from which the dance got its name.

Elderly women donning animal skins like chinkobo worn by Gusii traditional dancers would be glittering with copious amounts of oil smeared all over their bodies.

Inviting beats Decorations of beads round their necks make them beautiful to behold. Their long earlobes are also adorned with home-made ear-rings.

Men wore nothing except long robes tied around their waists. John Chacha, 45 remembers the last time he saw the embegete being played was in 1978 when the then President Daniel Moi visited the Kuria immediately after his installation as Kenya’s second head of state.

“It was a once in a lifetime opportunity to see how the elders danced,” says Chacha.

Just a single beat is enough call to all those who know the intricacies of the dance to join in.

Children stood amazed by the way old women and men shook their heads, shoulders and legs rhythmically to the beat of the magical drum.

As various cultures continue to lose their identities, Kuria community stands out as one of the communities whose cultural artifacts like the famous embegete drums and other musical instruments are stories of the past only found in museums.