PROFILE: John Kennedy: The nominated MCA on a mission to empower Migori youths 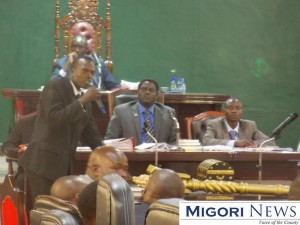 Born back in 1987 at Rakwaro village in Rongo, Migori County, Omondi attended his Primary school at Rakwaro Primary school, sitting for his Kenya certificate of Primary Education, KCPE in the year 2000.

He then proceeded to Kwa Mixed Secondary school, also within the county in 2001 and sat for his Kenya Certificate of secondary Education, KCSE exams in the year 2004.

In 2005, Omondi, having developed interest in media and journalism, joined Mombasa Polytechnic in Mombasa where he undertook his Diploma in Media studies, which he completed in 2006 and got a mean grade of B plain, just narrowly missing admission to the University through the Joint Admission Board, JAB.

He ten set out tarmacking and after several months of ‘tarmacking’, ended up at Kaluworks Limited in Mombasa where was employed as the personnel assistant until the year 2009.

And according to Omondi, what made him be elected to those leadership positions, and especially the chairman of the student governing council was his ability to listen to students and provide solutions whenever there were problems.

“Students had a feeling that they could always trust on me to represent them well,” he said adding he was also able to handle the University administration with respect and understanding hence there was never a major stalemate between the students and the administration.

At the assembly, Omondi has already come out as an eloquent debater and a string defender of the youths.
He sits in three committees, Early Childhood Committee, Labour and Social Welfare Committee, and Privileged Committee where his work is to ensure that the interest of youths is taken into consideration whenever any bills are being debated on the floor of the house.

One thought on “PROFILE: John Kennedy: The nominated MCA on a mission to empower Migori youths”