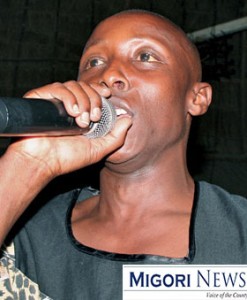 “I will retire from music after three years to do farming and business.”

He is one of the best known Ohangla musicians in the country and has been invited to perform in performed across the world among them Germany and the United States of America.

But, unlike many of his contemporaries, John Okinyi Ng’oge or as he popularly known among his adoring fans Osogo Winyo had remained humble and easy going, even as his music career has continued to soar.

“I believe in being humble and treating everybody with respect,” Osogo says during interview with Migori News after accepting to spare some time for the interview.

Osogo says his music career started in his Primary school days where he used to play Orutu as he took part in the music festivals where he represented the school.

This continued when he joined a Secondary school in Migori town

As most young men, he then opted to travel to Nairobi to try and secure employment and stayed in Kayole estate where he did menial jobs as he struggled to make ends meet.

As a young musician he collaborated with different artist like Nelson Andiego, Joel Angutha in the same line of Ohangla songs.

He later joined others like Kalamindi, Migingo Orutu system, which eventually changed its name and became what is today known as the Ohangla boys’ band.

And that was the start of the long and exciting journey which has seen him glob trot, sell thousands of albums, rub shoulder with the mighty and become a household name in the country.

“I started this journey 15 years ago and so far am reaching the climax of my career,” he said adding that his main aim was to try and be in the same level with his age mates.

And he is one of the first people to admit that his success and that of his songs had even surprised him.

Osogo also tells that the climax of his time as a musician was in 2003 in Kisumu in Raila’s home coming where fans crowded the show and where he was among the musicians who got the opportunity to perform live for the guests.

“That was one the best day of my music career to date,” he says adding that the reception his songs got will stick to his memory for the rest of his life.

Another memorable performance he remembers is the first Safaricom live where the fans went crazy through his new hit the “wan ji ariyo” which he says was also a memorable day for him.

“Have got many hitting songs but some have been quite good and encouraging, my song release have been ironical as most of them hit a year later after the release”. Added Mr. Osogo

And now, Osogo has set his sight on retiring within the next three years and coming back to his other passion, which is farming.

“I love music but I just want to do it for the next three years then I come back home and enjoy farming for the rest of my time.” He said.

And unknown to many people, ‘Osogo Winyo’ is also a strong Christian who do his normal services in the Legio Maria church and tells people that knowing God is the source of life.

“God is my greatest inspiration and I believe it is God who has made me achieve all that I have managed,” he says.

He adds that he has always strived to ensure that he lives according to the ways of God.

He further describes his moments and tells how life is for a Christian who works in the music industry.

“People don’t know me and my life as a musician because they feel I cannot be a Christian or am just a normal person.” he said.

During his song production Osogo said it takes place in three different categories beginning with introduction, body and the climax just like a normal written genre.

And he advises youths and young musicians to work hard and not to allow anything discourage them if they are to achieve their goals in life.