Dennitah Ghati: Standing up for girl child’s right in Migori 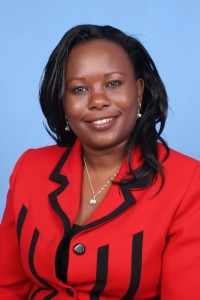 For Migori County Women Representative Dennita Ghati, the election to the national assembly was just the beginning of another chapter of her fight for the right of the girl child.

“I believe it is still same thing but at a different level”, Ghati said soon after being declared the winner in the polls in where she was overwhelmingly elected as the county’s first women representative.

In the results announced by the Independent Electoral and Boundary Commission, IEBC Migori County coordinator Jairus Oballa at the Migori Teachers College where the County tallying took place in March 2013.

In the results announced, Ghati who was vying on an ODM party ticket garnered 181,457 votes to win the seat, beating her opponent Fatuma Mohamed of PDP who got 58,176 while Elzeba Ayuma of TNA came third with 4778 votes.

It has been a long journey for the former journalist, who started as a reporter at The Standard Media Group before rising to a sub editor, in between attending a number of educational institutions.

Born in Kegonga area of Kuria East district of Migori County, just a few Kilometres from the Kenya Tanzania border, Ghati attended local schools before joining Kenyatta University in Nairobi where he undertook his Bachelor of Education degree course.

She then opted against joining the classroom as a teacher and instead decided to join the media where she joined Standard newspapers as a news reporter.

“I believe that this way, I would be able to reach mor people and help in enhancing the girl child issues”, she says adding that by writing, she had hoped to reach a wider audience and so she will be able to sell her agenda to them.

And growing up in an area where Female Genital Mutilation, FGM is still very rampant with approximately 93% of all the girls from the region still being forced to undergo the rite, Dennitah’s most reporting was on the issue where she pleaded with the residents to stop the rite and give the girls a chance to be in school.

He writing and commitment to fight against the vice would eventually see her win a scholarship from FORD foundation to go and study her Masters degree in Community Work from the University of Columbia in the United States.

She eventually came back to her work at The Standard at the end of her studies but would soon leave to dedicate her entire time to fight the vice which she felt was not reducing despite the millions which were being put into it every year.

“ I felt that may be if I stayed there, I would be able to achieve more in the fight against the rite”, she says adding that by that time, she realised that the figures of girls undergoing the rite had not gone down and instead were on the rise.

Another reason was that while she felt by writing about it she had managed to bring it to the attention of the world and a number of institutions had come up to try and help in stopping it, she felt that she could also do more than just writing about it in Nairobi.

And so, she eventually left Standard and formed Education Centre for the Advancement of Women, ECAW, an association which has been involved in the fight against FGM in Kuria as well as promoting education of the girl child throughout the county.

As the chairperson of the Centre, Ghati has been involved in lobbying the parliamentarians to pass anti FGM legislations as well as talking with the provincial administration to help in the enforcements of the already existing laws.

“I realised that the problems was not mostly in the lack of laws but on the enforcement”, she says adding that she has therefore been organising meetings with chiefs and police to try and talk to them to help in the fight against the vice.

She has also been organizing rescue centre for the girls who are faced with being forced to undergo the rite who can go to the centres every December and stay there until at the end of the circumcision period which is at the end of the year.

And with her election as the area Women representative, Ghati has continued to fight for the rights of the Migori girls and women at a different level and hence achieved even more success.

“I believe this is a great chance for the voices of the Migori Women to be heard” she said adding that she intends to use her new position to fight for even greater advancement of the women of the county.

“I believe I can articulate the desires of the women of the Migori County”, she says adding that apart from fighting FGM, her other main aim has been to ensure that women of Migori County also have opportunity to go to school, and make a career of their choice.

One thought on “Dennitah Ghati: Standing up for girl child’s right in Migori”