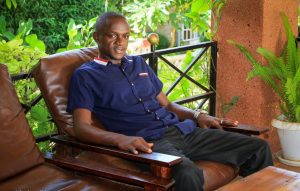 With hardly one year to next year’s general election, several aspirants for various positions are readying themselves for the battle to clinch their desired seats.

Among them in Suna West constituency is Vill Beffy Otieno who is out to outdo his rivals for Oruba-Ragana ward.

Born and bred at Wouth Ogik estate in the ward, Beffy Otieno believes he has all it takes to steer his ward to the desired destination.

The towering officer in health records and information got his Bachelor’s degree from Kenyatta University and believes education is fundamental to any leader.

According to Otieno, electorates all over the country should place much interest on their leaders’ education before delving into other sectors.

“Any leader and in my case, especially an MCA should be well educated to make it easier for him to better serve his people,” Otieno says.

This, he explains, has been the major misgiving by the current cohort of MCA’s in the county assemblies not only locally but throughout the country.

For instance, Otieno says our county assemblies cannot account for their time in their respective assemblies with respect to the laws and policies they have passed.

“Were it that a good number of our current MCA’s were well educated, then their participation and engagement in legislation activities would be commendable,” the Oruba – Ragana wards aspirant explains.

Beffy Otieno also says that with education, an MCA is better placed to understand issues affecting all socio-economic levels in the society.

“Additionally, a majority of educated folks are well exposed and are able to come up with various initiatives that cab improve the lives of the people they represent,” he explains.

However, to place himself above his peers, the MCA aspirant has put in place key sectors to drive his campaign.
These are youth empowerment, Improving Socioeconomic status, health and education to help in proper legislation and oversight role.

He believes he is better placed to tackle issues affecting the youth as he himself is a youth.
“With me, the youth will be having somebody on the inside who is very passionate about their affairs,” Otieno explains.

He adds that he has been aiding youth groups in registering their groups and ensuring that they are up and running.

“After they register, I fund all the processes and also help them in opening a bank account that I deposit Sh1000 as startup capital,” the aspirant notes.

He also believes with him in office, women will benefit much from their respective groups.

“Currently all that women groups are doing is table banking and it does not help them much. But during my tenure, I will help them initiate economic activities such as farming which will help them in their small scale trade as opposed to importing as currently is,” the honourable aspirant explains.

The development enthusiast believes that he is the MCA that Oruba- Ragana should have heard and seeks for the support of the people.