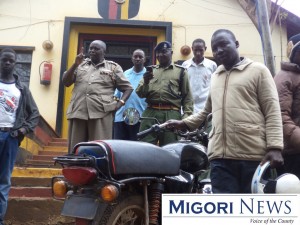 Alfred Muia Makoma, the immediate former Migori OCPD completely fills his seat which creaks each time he stresses a point during the interview.

An endowed man with a warm smile, Makoma doesn’t cut across as a crime buster but when he talks about security situation in Migori, Rongo, Awendo and Uriri where he started work in 2009 then you realise he has big shoes to be filled.

As the police boss for two years the father of five, two girls and three boys has brought change in security and was recently feted by colleagues, journalists and opinion leaders during a farewell bash at Grabo Hotel

His colleagues reckon that since he came a lot of efforts have been done to weed area of criminals terrorising residents as 7pm creating fear and havoc.

The officers who were drawn from the Criminal Investigation Department, the GSU, Administration, Regular and Anti-narcotics police units praised the work the 57 year old.

But the best part of Makoma’s legacy is the fight against drug abuse where he made it tough for bhang traffickers to use the Sirare-Kisii to road to take their illegal drugs all the way to Nairobi and Mombasa.

Within his time bhang worth over Sh50million has been impounded at Migori Police Station alone and several vehicles used by the traffickers are packed at the police vehicle yard.

So thorough was the patrol that traffickers chose to use rural; roads and Lake Victoria to smuggle in the drug that is grown in large scale and cheaply in Tanzania and has a ready market in Kenya.

Aggrey Ukiru, the Migori Traffic Base Commandant said Makoma coordinated well the traffic unit in the busy highway which has been key to not only curb the high road carnage but a means of nabbing traffickers through prompt intelligence sharing.

“His with the traffic unit to make our operation easier,” Ukiru said.

Makoma passion to fight illicit drugs ensured many culprits were arraigned in court and others jailed at the
Migori prisons with the bhang haul being burnt and destroyed by the police and the judiciary officers in the county.

“The fight against drug abuse and trafficking has to be an all-round process that should not be left to the police officers alone but the general public should participate in it to wipe it out in the society,” Makoma said.

Makoma said that after seeing his junior officers living in a shanty at Matopeni Police Line he chose to motivate and encourage them by building them better quarters using his own money.

Makoma organised an in house collection with senior officers who raised money to build the houses.

The project that is near its completion by the end of the year will house close to ten junior police officers who have been living in poor working conditions and the general public expects them to perform better in the day to day activities in the police division.

“I took the initiative to build the junior police houses using my own money in order to enable the officers have good housing units to enhance their urge to work in the division.” he told Migori News.

The police boss is also credited for working out methods on how to curb violence before and after the general elections as his fellow police officers had told him that Migori County is one of the hotspots in the country where violence erupt every general election.

“After being briefed by the intelligence on the plans that were ahead during the campaign period, the elections and its aftermath he came out with the plans to curb any form of violence that he thought would occur in the police divisions’ he was mandated to serve.” said the Kuria East Police boss Gladys Ogonda.
Worked With Boda Boda Operators

The boda boda operators through their chairman Jack Omondi laudd the officer for holding various meeting with them that reduce motorbike thieves greatly.

He is also credited for dismantling a criminal ring that will take a lot of time to regroup and start terrorising the peaceful residents in the various places in the areas where he used to work.

As he moves to his new work station in Lari police division fellow police officers have asked his successor Joshua Opiyo to work the same way as his predecessor.