Kuria FGM victims asks for leniency from the President 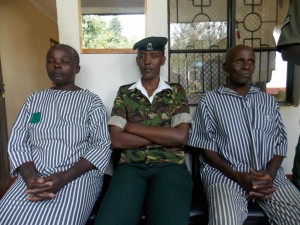 At 87 years, Simon Mapangala from Kuria community in Migori County does not understands why at his age he is serving four years in prison after breaking the punitive Prohibition of Female Genital Mutilation Act, number 32 of 2011.

Mapangala has already serving his sentence alongside his 51 year old wife, Rosao Ajando Mapangala after their teenage daughter went with her colleagues to be circumcised against their will.

The couple has celebrity status at Migori GK Prisons as they are often allowed to visit each other during public holidays, albeit with strict supervision from warders who according to law prevent any close contact.

Seated only few inches from his wife and separated by a female prison warden, Mapangala insists that even though the teenager insisted on going for circumcision the judge still found them guilty.

“She was a minor and when she appeared before Kehancha Law Courts she was asked thrice if we had pushed her to circumcision and she denied. The judge still ended up imprisoning us,” he says ruefully.

The couple said their 15 years old daughter, who will be in class seven next year, went for circumcision against their will.

“As a family we have been against the vice and her elder sisters didn’t go for the cut, but she was adamant and went without our consent,” Rosao says.

With memories of his ordeal still clear in his mind, the old man says trouble started for them when their daughter got complications from her wounds.

“It was December 2012 during circumcision period when we were arrested at Kehancha District Hospital by police officers when we went to discharge our daughter,” he narrates.

The couple, with child’s mother coming from the Luhya community which doesn’t circumcise their daughters, insist the vice is retrogressive, they have been against it and only fell victim of the new punitive law.

“We couldn’t just leave our daughter alone in the hospital when she was sick. It’ssad that we were charged for aiding and abetting the process,” Mrs. Mapangala says.

The two are the victim of the cross cutting new law that carries a penalty of imprisonment for a term not less than three years, or to a fine of not less than Ksh200,000, or both.

Female circumcisers, those aiding or abetting FGM, use of premises to perform FGM, possession of tools or equipment used in FGM, failure to report cases or use of derogatory language against women who are not circumcised carry the same punishment.

According to Cess Mugo, Project Manager for Education Center for Advancement of Women (ECAW), an organisation championing the war against FGM in Kuria, the couple fell victim of ignorance of the law.

“Most people and locals are very oblivious of the new law and only come face to face with its full wrath when before the court of law,” Mugo explains.

She says the couple was jailed for not reporting the matter to the authority, use of their premises to complete the process or possessed tools or equipment used for circumcision which even include wrappers worn by circumcised girls.

“Until 2012 before the law was passed and started coming into effect most people from Kuria Community thought it was a ride in the park. The new law has brought reality of jail term to them,” Mugo says.

On the other hand Peter Gwengi, Director of Lake Victoria Initiative Network (LAVIN) says the new laws have driven the vice underground with most girls crossing the border into Tanzania for the cut.

“Most girls and circumcisers have been forced to flee into the neighbouring country where the law is lax. To avoid being arrested, local administration here is under pressure to clear the vice from their areas,” Gwengi says.

He calls for both Kenya and Tanzania officials, civil society organizations and leaders from Kuria community cutting across the border to work together to end the vice which has negatively impacted on development.

“Shortly after December circumcision ceremony, the region is faced with high cases of cattle rustling as men look for cattle to pay bride wealth to marry off young girls. Schools also indicate high cases of sexual assault, teen pregnancies and drop out due to marriages by second term,” he says.

Speaking to Tusemezane, the couple says they spend sleepless nights in the prison thinking of their family back home.

Mapangala had three wives and is survived by two including Rosao with a total of 16 children and several grandchildren.

“How are my children? Are they going to school and did they sleep hungry again? Are they safe or already driven away from my homestead by my clan? These are questions that torment me,” he questions.

He pleads for leniency from the Head of State, President Uhuru Kenyatta for at least one of them to be allowed to go home and look after their family.

Mapangala says the Kuria community is in the right course to end the vice which will be sped up through behaviour change approach to younger generation.

“When I was young the Kikuyu community was practising the vice but it has since disappeared. The Kisii community has also showed progress and Kuria will follow soon,” he says.

Mapangala insists FGM has beenbehind poverty and high child marriage in the Kuria community and rob children of their childhood.

“My daughters who refused to undergo the cut are more educated and married later than others,” she said.

(The article was first published on Tusemezane magazine, Volume 5 of November 2014)