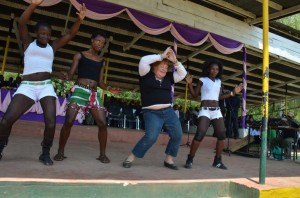 Elaine Waterfield, a Briton working with the local NGO to provide moon cap at a function in Migori County Stadium

Happiness Sidai, a 13 year-old class eight student at St Catherine Kioru Primary school kicks the ball towards the goal before being tackled. The whistle goes off as the referee, George Achieng’ who is also her head teacher points at the penalty spot.

Sidai takes a shot which sends the ball to the back of the net before her school mates mill around her to celebrate.

The win will be key in making the school pick a trophy in a mini league involving girls from eight primary schools in Suba West sub-County, Migori County.
Challenges

“During their monthly periods most girls always just come and ask for a sick leave or just become absent from school which makes you realise they lack sanitary towels,” says Achieng’.

Achieng’ says attendance at his school with 163 girls out of 322 pupils is affected as the girls reach their maturity from class five. He notes that a local which have been supplying sanitary towels realised they weren’t reusable.

Started about a year ago, the Rural Empowerment for Development Initiative Movement (Redim) started the drive to give girls in Suba sanitary towels in primary and secondary schools.

They have been able to reach over 1,100 students.

“The towels though useful were limited that’s why we came with the simple Moon-cap which has a tough ring and a polythene collecting ‘dish’ to collect the menstrual blood and can be re-used for up to a decade,” explains Elaine Waterfield, a Briton working with the local NGO.

The small Moon-cap, the size of an ear is held in place by panties and can hold the menstrual blood in place safely to facilitate movement of girls without it staining their skirts which made boys to ridicule them in class.

“The Moon-caps were donated by Femmiwear Company based in United Kingdom and USA where they cost about Sh900 and are offered freely to students in the west. In this area, we are beginning with about 150 caps to see their retention,” explains Waterfield.

She says the cost of bringing themto Suba was done by Kingsway Church in Southampton while the balls and trophies for the mini league were facilitated by Leicester City Football Club.

Redim which works with widows, orphans and vulnerable girls in the area seeks to empower girls to “have equal opportunities in education by safeguarding their school attendance and give them a voice to be heard”.

Sidai whose story echoes that of other girls told Reject that before she got the Moon-cap she used exercise books, leaves, old blankets and mattresses to help deal with her menstrual flow.

“Boys used to laugh at us during our periods which caused absenteeism as when we got the periods at school we would go home,” Sadai says.

She adds: “I got six towels before but this Moon-cap will clear my headaches.”
Her friend Evelyn Achieng says that due to poverty, their parents cannot afford the luxury of buying sanitary towels which makes them vulnerable to boys, something that increases the risk getting pre-mature pregnancy.

According to Malach Achieng’, a teacher at Abwao Primary School says that the 267 girls in her school have to contend with other factors like poverty, child labour and money in the nearby gold mines, fishing and tobacco farming which can be used to lure them.

“We often counsel them together with their parents some who don’t know the benefit of buying sanitary towels to their daughters and how it affects their education,” explains Achieng’.

One such parent is Mary Adisa, whose four daughters did not finish primary school, realised the problem of sanitary towels in their education after her last born who is class seven came home with a pregnancy.
Effects

“I found out too late that my daughters became pregnant, three have already been married. When my last born started using sanitary towels from school I realised her performance had improved,” says Adisa.