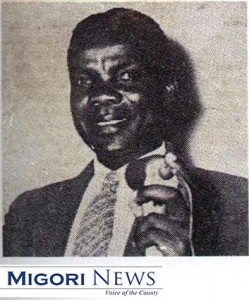 Some of my friends and followers here have asked me to give a brief history. So here I share!

Argwings Charles Michael George Kodhek, Chiedo Mor (some say Moa) Gem was an outstanding lawyer and politician.
Kodhek was born in 923 in Nyawara at Gem, Siaya county in central Nyanza.

He was educated at Yala {now popularly called St. Mary’s], Maseno and Makerere University College in Uganda.
In 1947 he got a scholarship to the University of South Wales, graduating as a lawyer and social scientist two years later.

From there he went to St. Andrews in Scotland before coming back to Kenya at around 1951 to start a legal practice as the first black lawyer.

During this time he was married to a white lady, Tate Mavis.

He later got into politics and became a member of the Legislative Assembly (Legco) representing what is now Nairobi Eastlands Area.

However, he was later in 1957 replaced by Mboya, who, fresh from studies in Britain and having worked in the labour movement, was more suave, and articulate and appealing to the low class workers in Eastlands.

He died in 1969 in a suspicious road accident at the junction at Hurlingham, of what is now Argwings Kodhek Road on a current stretch between the Department of Defence towards the Chinese Embassy to join Lenana and State House Roads.

His car reportedly overturned at the junction as he slowed down.

Other accounts say he was a victim of a well-planned assassination with a gunman shooting and puncturing his car from where he was injured and rushed to hospital where “ne gichudhee, chuth!”

Kodhek epitomised Luos love of Western education who took it seriously from very early following calls by the then Chief Gor Mahia Kogalo of Kanyamwa and Odera Akang’o of Gem who argued that it was important to “learn the education of the white man, know his tricks and wisdom, then use his tools to chase him away from your land”.

In 1915, the Colonial Government sent Odera Akang’o, the Ruoth of Gem, to Kampala, Uganda where he got impressed by the British influence there and upon his return home he initiated a forced process of adopting western styles of “schooling, dress and hygiene”.

This resulted in the rapid education of the Luo in the English language and English ways.

Argwings Kodhek, popularly known as “Agwenge Wuod Oremo” was from Gem and was evidently one of those who got influenced and benefitted from the drive by Odera Akang’o. 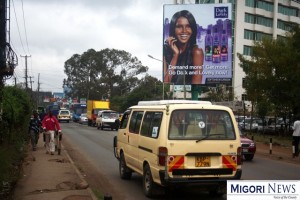 Lawyer C.M.G. Argwings-Kodhek, like many other educated Luos, used his education to push for independence, providing the intellectual expertise and articulation of issues against the colonial authorities. For instance, Kodhek used his legal expertise to defend Mau Mau suspects in court.

Although he was reported to have been killed in a road accident, history has now indicated that the death of C.M.G. Argwings-Kodhek in 1969, once a close confidant of Kenyatta’s, may have been the result of a gun shot fired from a police-issued rifle.

The killing of Pio Gama Pinto in February 1965 was considered the first high profile political assassination. Many people believe Kodhek was the second victim of such carefully planned assassinations that have since claimed many other prominent Kenyan leaders.

There are reports that former cabinet minister the late Paul Ngei actually identified the police vehicle that carried the assassins to the ambush scene on Hurlingham Road (now Argwings-Kodhek Road).

Former Cabinet Minister Andrew Omanga, then C.M.G.’s Permanent Secretary reportedly indicated that he (Omanga) had found him lying on the road shortly after the ‘accident’ and that Kodhek told him he had heard a ‘gunshot’.

Former powerful Attorney-General Charles Njonjo was reported as saying, as Agwenge lay dying in the hospital the next morning, that the ‘wounds are consistent with gunshot wounds’.

It was rumored that Kenyatta, who was getting increasingly exasperated by “a difficult to manage Oginga’, had contemplated appointing Argwings-Kodhek as Vice President in 1965.

However, CMG had turned this offer down, from the emissaries. Earlier, it was also believed he was favored to be the first Attorney General but the coterie of influence peddlers building around Kenyatta rooted for Charles Mugane Njonjo.

The intrigues in Kanu and in Kenya’s political landscape had reached fever pitch after the 1966 Little General Elections in which Odinga and his team in the new opposition party, Kenya People’s Union (KPU) was so frustrated by the government system that he returned to Parliament with just about 7 members to form the opposition after the Kadu was disbanded in 1964.

Both Mboya and Agwenge became increasingly convinced that that there was a plot to edge out all key Luo leaders from the government and the mainstream politics, and possibly eliminate them.

Odinga had left the government in March 1965 in a huff to form the Kenya People’s Union (KPU), with firebrand Bildad Kaggia and other Kanu radicals. This was after Mboya, at the behest of Kenyatta and his inner team, engineered a change in the Kanu Constitution to create 8 Vice Presidential positions for Kanu, the ruling party and in Nyanza, Lawrence Sagini from Kisii, was installed as the party’s vice president from the province.

As Odinga left, he reportedly warned Mboya to be wary of the intrigues in the government: “Oke G’Odhiambo, eri ugola e Piny Owacho kod bura mar Kanu, to ng’eni jogo ok bi weyi icham!” Kodhek was reportedly also cautioned about the goings on.

By 1967, Both Mboya and Kodhek were sending quiet emissaries to Odinga over the threat they were faced with, and reports indicate that the three were on the verge of forming a merger of their parties into a huge political alliance, which was already known could pause a big threat.

The alliance, which “okwach kich” had sniffed already (they were being tailed everywhere!) was never to be. Agwenge was the first to go in 1968 through the “accident”, followed by Mboya in July 1969, through brazen daylight shooting on what is now Moi Avenue.

Three months after Mboya’s death, Odinga and key members of KPU were rounded up by the police and detained, after the altercation between Odinga and Kenyatta at the opening of the “Russia Hospital” (now the Jaramogi Oginga Odinga Referral Hospital, which led to the Kisumu massacre. KPU was immediately banned. Odinga was to be in for 18 months while others, including Wasonga Sijeyo, also from Gem, were to stay in, much longer!

This historic picture is of the Kisumu massacre in 1969. Oganda pod paro malidhi mane jogo otimonwa!

(The writer is an accomplished journalist, writer, educationist and civil servant. He is the chairman of Kenya Correspondent Association)