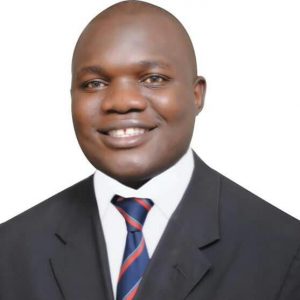 When Micah Omondi Otieno, 29 years, talks about his vision for Awendo constituency he does so with a passion.

The young man, a trained Kenya Police officer and graduate of Industrial Chemistry from University Nairobi has gone through formal employment and starting about three companies which employ over 500 people both directly and indirectly.

“I was born at Athiko slums in Awendo constituency where I went to Marienga Primary School before sitting for my first national examinations at Sare Primary,” Micah, as he is popularly known, told Migori News in an interview in Awendo town.

The towering man with a commanding presence said he later went to Kanyawanga High School where he passed under Joint Admission Board to join university.

“For two years while I was waiting to join university I was lucky to be recruited as General Service Unit (GSU) trainee as Kiganjo College,” he narrates.

He late graduated at UoN in 2011 in what he passionately said shaped his political and leadership dreams “which started way back in nursery where I was elected a leader.”

“All throughout each level of education I have been able to be in leadership position, some in multiple cases despite being at a younger age,” he says.

He said while he was only aged 18 years he was in charge of the Squad Three which included members who are a decade older in Kenya Police training college.

“Throughout the university I held several leadership positions culminating into the Secretary General of the students’ union,” Micah says.

He says he worked briefly as the Programme Operation Officer of Securex Security Company which saw his resign and start his own security firm which employs about 300 people.

“Apart from the security firm, I also have a firm bottling water and beverage and another one based in Awendo which makes environment friendly briquettes charcoals which I sell outside the constituency,” he says.

Micah says the incumbent Jared Kopiyo has done dismally he can’t give him a grade on his performance since it is outside the scoop.

“Kopiyo is the epitome of a failed leadership in Awendo by dragging us down despite having the only industrial in Migori- Sony Sugar,” Micah says.

According the youthful aspirant the incumbent has mismanaged the CDF kitty to benefit a few of his cronies “some have stolen enough money within four years to seek political office and flaunt their ill-gotten wealth openly.”

He says Kopiyo has been directly been involved in cases of insecurity in the constituency and will never be the best leader to tackle the menace in the county. 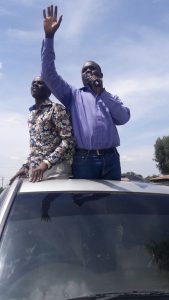 Micah on the campaign trail in Awendo

“He was supposed to give leadership and political goodwill to end the insecurity menace and he has failed, I can say without doubt as a trained security officer that Kopiyo has failed,” he said.

Micah, as a youth, believes he is the best bet for Awendo leadership to make sure the constituency attracts positive attention nationally and internationally.

“Kopiyo is not even aligned to the Luo community leadership by leaving Raila Odinga presidential bid in the constituency in the balance, I will reverse that as we are headed to 2017,” he said.

Micah will vie on ODM ticket and has already paid the required nomination fee saying so far he was “encouraged throughout by Awendo residents.”