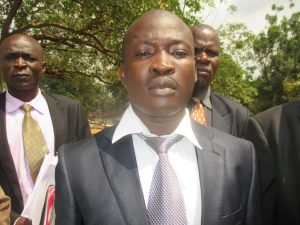 North Kamagambo ward representative Richard Solo will fast track a bill in the county assembly that seeks to regulate the sugarcane growing and juggery production in Migori county.

He said that if enacted it would end the exploitation of sugarcane farmers who deal mostly on the juggery production by cartels who are out to benefit for selfish interest.

This comes after the national government gave directives through the Deputy county commissioners (DCC) to ensure juggery production in those areas are stopped as an avenue of dealing with the production of illicit brew in the country.

Solo said that since agriculture is devolved and the national government failure to appropriately lay policies guiding the cane farming has greatly contributed to the acute challenges the farmers have faced over time as well as covering the loopholes in the sugar sector that has widely affected the sugar cane farmers.

Speaking in Rongo town after a consultative meeting between various leaders and the juggery production farmers in the area Solo said that there should be an assurance of the region economic growth from the juggery production adding that it is the only way farmers’ interest will not be trampled upon saying that most of the area residents depends on sugar cane and the production of juggery as a means of their livelihood.

“Unless all these are not solved in time then our farmers will never be advantaged. I am a product of juggery production, the DCC and the national government must tell us between the production of juggery and the illicit brews which one came first. We can only stop this business if they give us the best alternative compared to this,” said Solo.

He however accused the government for conflicting policies from the intergovernmental relationships as stipulated in the article 181 of the constitution hence engaging into unfounded politics instead of fostering economic growth through agricultural management.

“We truly accept that we have a challenge on dealing with illicit brews in the region. But we say this would be of no use if we start on a faulty note. Our juggery production farmers are being exploited and apart from Ksh.10, 000 being taken from them to have a license of such kind of business, they also pay tax. We do not know where our people shall find another license despite agriculture being devolved,” he added

He asked the government to find other ways of fighting the production of illicit brews in the community rather than interfere with those who are doing business for their livelihood.

He has urged political leaders from Migori County and the millers regions to come out and support in the ongoing process and rework the shareholding structures to even include the county government on massive cane development and juggery production exercise in order to improve yields.

On his part the Deputy County Commissioner Mr.Joseph Satia said that the government will never relent on fighting the illicit brew in the region.

He put to task the juggery production farmers to look for the markets outside the region adding that those who will be found will be prosecuted and face the full force of law.