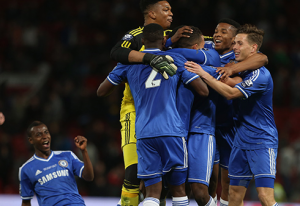 Chelsea were crowned Barclays Under-21 Premier League champions on Wednesday night after a 2-1 victory over Manchester United in the play-off final. Goals from Charly Musonda and Lewis Baker ensured the Blues came from behind to win the title for the first time in front of 13,000 spectators at Old Trafford.

The Blues started the brighter of the two teams with Baker twice drawing saves from United goalkeeper Ben Amos, the first a full-stretch dive to parry a 25-yard strike that was heading for the top corner.

But the hosts struck first with a composed finish from Tom Lawrence in the 12th minute. Saidy Janko sent in a low cross from the right that was cleverly laid off by James Wilson to Lawrence, who stepped inside a Chelsea defender before curling a left-footed shot into the far corner.

Despite the setback, the Blues quickly regained their composure and drew level in the 22nd minute through the lively Musonda. After being picked out by captain Nathan Ake, Musonda cut in from the left and jinked past two defenders before scoring low with his right foot from the edge of the penalty area.

Chelsea came close again in the 32nd minute when John Swift’s curling 20-yard effort whistled past a post, and a clever dummy from Islam Feruz provided some space for Swift on the edge of the box but the striker was unable to capitalise.

As they had in the opening period, Chelsea began the second half strongly, keeping possession well in the early exchanges and testing Amos in the 48th minute when Ola Aina unleashed a 30-yard strike that bounced awkwardly in front of the United goalkeeper.

Baker had a chance to give Chelsea the lead but he blazed his shot over the bar after a smart cutback from the impressive Ruben Loftus-Cheek. Minutes later it was Loftus-Cheek’s turn to go close as his drive from a tight angle was well saved by Amos’s legs.

United rarely threatened but Jamal Blackman in the Chelsea goal was forced into a save in the 78th minute when Musonda lost possession in his own half, allowing Ben Pearson to burst through on goal and fire a left-footed shot straight at the Chelsea goalkeeper.

The visitors’ dominance was rewarded a minute later when Baker scored the decisive goal. A poor touch from Charni Ekangamene presented the ball to Baker on the edge of the area and the Chelsea midfielder found the bottom corner of the net with a clinical finish.

United applied some late pressure and almost forced an equaliser deep into added time when substitute Tyler Blackett connected sweetly with a 30-yard volley, only for Blackman to save to his right. Chelsea hung on for a deserved victory to depose the winners of the inaugural competition last season.