Notice: Undefined offset: 2 in /home/absalogi/public_html/wp-content/plugins/visitors-online/visitors-online.php on line 438
 We have not fired our coach- Sony FC | Migori News

We have not fired our coach- Sony FC 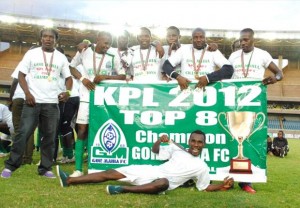 Sony FC has refuted claims in a section of press that they have parted ways with their new coach Leonard Otieno Odipo.

Speaking to Migori News, the club’s Vice Chairman Zack Irungu said they only had a meeting with the newly appointed coach to assure him of his position after the club parted ways with former Harambee Stars coach Zedekiah ‘Zico’ Otieno..

He said Odipo just took over this season and he will be given a chance to perform even though he only has a point from a draw with Ulinzi FC.

“We have not parted ways with Odipo over the game as the season has just started and we still have faith in him,” Irungu said.

“I know the fans have been complaining about our performance, but at the meeting we assured the coach that management is the appointment committee and we have faith in him,” he said.

The former Tusker FC team manager was picked from a list of about ten international and national applicants for the vacant position.