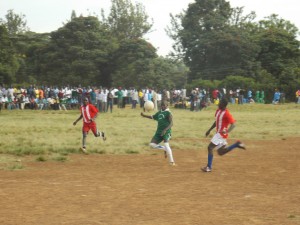 Kisumu Day secondary school emerged the invisible football giants after thrashing Homa-Bay high school 4-1 in a penalty shootout final that was played at Homa-Bay grounds yesterday to clinch the Buop Tourney for the 2nd time in a row.

The Nyanza region football champs took the top honors when they snatched the host a coveted trophy as they hoped to clinch the cup for the first time in six years since it was started.

Despite both teams trying hard to penetrate their backlines, no side could see the back of the net.

Kisumu day however looked to be good in the 2nd half with Billy Omwoyo converting an Amos Ogada’s through pass in the 60th minute but was ruled offside as both teams ended the game in a goalless draw in the 90 minutes of play before it was decide in penalty shootouts.

Gad Mathews the Kisumu day keeper and the best player in the tourney gave their side a start in the spot kick after scoring past his fellow keeper Brian Oduor of Homa-Bay for the opener.

Billy Omwoyo, Amos Ogada and Garvin Oduor both ensured they converted their kicks with Calvin Onyango giving their side the only goal after Katwe Thomas, Brian Otieno and Walter Brian kicks went far the post.

Kisumu day qualified for the finals after beating the last year’s first runners up Homa-Bay Kenya Medical Training College in penalty shootouts as Homa-bay high school edged out Wiobiero high school 2-1 in the stunning semifinal encounters that attracted thousands of supporters who came to watch.

In girls football Mawego technical Training College who are also the defending champions in the Asumbi Tourney that was played last weekend emerged winners again after supplanting Moi girls Sindo 2-1 in a stunning final encounter.

St. Mary’s Mabera girls from Kuria Migori County were also victorious in the tourney after clinching both volley ball girls and basketball before Sengera Boys winning the volleyball men.

While crowning the champs, the sponsor for the tournament Andrew Buop commended all those who took part in the event saying it was a chance to show case their talents as well as prepare them for the upcoming school games that begins later this month.

He encouraged institutions to take sports seriously so as to improve on sporting activities as well as promote stiffer competition among the competitor.