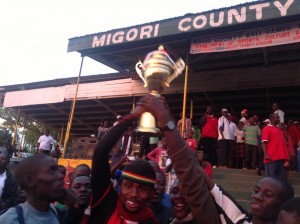 In the ladies category Awendo beat Suna East 2-0 in goals which were scored in second half.

Awendo ladies was in sizzling form throughout the tournament of being the only team not to concede a goal in the tournament to be voted the best overall team.

The winners got Sh50,000, runners up 30,000 while the rest got trophies for participating.

All eight sub counties were represented after teams where picked from ward level tournaments.

Thomas Maneno, the youth and sports executive urged youths to be committed on their dreams and talents.

“The best person to help grow and nature this talent is our parents and we request the parent to give their children good foundation towards their talent to bring up not only a learned group but talented too”. He said.

The events was attended by different leaders form the county including sports chief officer Mary Midida ,director sports Silas Jonjo among other guest from various part of the county.

Speaking after the game Awendo ladies coach Mark Ogol said it is due to discipline and hard work that has resulted to the outcome of their success in the tournament.