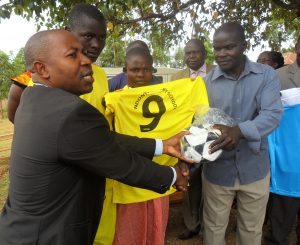 22 primary schools from Rongo sub-county have a reason to smile after the Rongo NGCDF rolled out a programme to provide them with the sportswear from the kitty.

Speaking to press in Rongo primary school after giving out the items, Rongo NGCDF Chairman Mr.Joseph Onyango Ngare,said that only those schools which made their request were considered saying sports is one of the educational programmes in Kenya which is crucial and must be considered.

He said that the board was able to approve the request from the schools according to the laws that governs the NGCDF Kitty and were awarded a grand total of ksh 1.6 million for the budget where one school from every ward in the sub-county shall benefit from the programme.

He however promised to ensure the NGDF will heavily budget for sports programme in the next financial year for the schools that shall take their request despite the NGCDF being given 2/100 for the whole budget saying that if it was a mandate for the NGCDF they would have even budgeted for the secondary schools also but promised to honor their request in the next financial year for the schools which shall have made their request adding that they will in future factor sporting materials for female students in schools.

Some of the schools that benefited in the first phase included Nyarach,Banda,Gitembe, Nyaoke,kosodo ,Kamondi primary schools among others who got full set sports uniforms and Roma boots for a full football, volley ball and hockey teams.

On his part Mr.Nelson Kobuya who is the games teacher at Gitembe primary school applauded the NGCDF for its effort and feels motivated in education sector to have all round pupils saying most of the time pupils used to play bare footed which in most cases reduces their morale in participating in sporting activities.

He at the same time encouraged the pupils from the region to be participating in the games saying despite just enjoying and for physical fitness it also earns for the better future in their life time.

The Head teacher Rongo Primary school who also doubles as the sub county Head teachers association Isaiah Odongo however thank Rongo NGCDF for their good gesture saying the materials will go a long way in seeing that the sporting activities is enhanced in the sub county.

He added that money given to school for co curriculum activities is insufficient asking other well-wishers to emulate NGCDF in quest for talent development in schools.