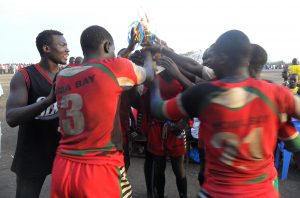 Nyandiwa TTC clinched this year’s Buop Open tournament after thrashing Kisumu Day 3-1 in a penalty shootout in the men’s football final to become the first champs to retain the trophy since the tournament began 10 years ago.

The teams went to a barren draw in the,90 minutes of play before taken direct to penalties in a stunning encounter that was played at Homa bay High School grounds over the weekend.

Nyandiwa’s Jack Oure, Brian Miguna and Fredy Ochola ensured their kicks went into the net as Kisumu days Brian Ndegwa, Andrew Ochieng and Castro Otieno both their kicks went wide the net with Felix Otieno nesting the only goal.

In the girls’ soccer, Nyakach girl’s high school which also represented the nation in the East African ball games championship in Eldoret took the top honour when they played the finals against themselves after splitting their teams A and B where team B carried the trophy after beating A 2-0.

In volleyball girls finals Mabera girls who are also the national champions beat Asumbi TTC 3 -0 sets 25-20,25-21,25-22 and in volleyball boys, it was all technician and teacher affairs as Asumbi TTC supplanted Mawego TTI by 3-1 sets 25-19 before Mawego reciprocating 25-20. The third set was tensed however Asumbi showed their mighty by winning the fourth and the fifth sets 25-18, 25-22.