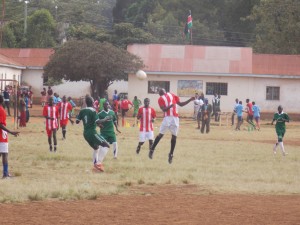 Calvince Odhiambo scored the all important goal in the 73rd minute of play in an entertaining final encounter that attracted thousands of spectators who thronged the venue to watch the march.

Nyaburu however qualified for the finals after beating Minyenya Zone 2-0 in the first semis as Kuna zone defeating Rongo 1-0 in the second semis.

Kuna zone however beat Minyenya 1-0 in the first girl’s football semi before Rongo beating Chamgiwadu zone 3-0 in the second semis.

Rongo sub county sports secretary Mr.Shem Luke applauded all the participants who had the opportunity to take part in the event urging them to ensure they represent well the Rongo sub county in the county ball games.

He at the same time urged the teachers and parents to encourage their sons and daughters to participate in such activities saying that they will at the same time benefit in various capacities of live.

He reiterated that the wins from various zones in Rongo Sub County were rehearsals for the county championships that will take place in Senye primary school in Nyatike Sub-County on second and third of March saying that they are certain the selected participants to represent the sub county well in the games.

“We are beyond doubt and confident that the teams we have enlististed for the championships from all the zones will represent us perfectly and that is why we have at all times desire for genuine players with proper discipline,” said Mr.Luke.