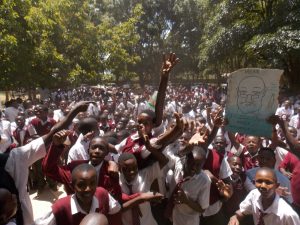 Kanga High School came from behind to beat Kodero Bara Two special goals lit up the St. John’s seminary Rakwaro grounds as Kanga high school came from a one goal down to whip Koderobara 2-1 in a sterling term 2 ball games soccer final over the weekend.

The match that was full of tension attracted a capacity crowd who thronged the seminary grounds to watch the two football foe play, saw Kanga high school seize the coveted trophy and will now represent Rongo sub-county in the county ball games that will be held later this month at Awendo green stadium.

Koderobara’s Edger Okoth fired an unstoppable bullet of shot into the top corner of the net from 20 meters yard to open the scoring in the 25th minutes of play before Shadrack Kawa of Kanga pulled an equalizing controversial goal from a 25 meter yard free kick just two minutes to the half time that hit the cross bar and bounce back on the line.

The match was however full of drama as it was halted for about 10 minutes as Koderobara players and fans attacked the center referee to raised complain over the controversial goal but later accepted after thorough consultations from the center referee Tom Odhiambo and the lines man George Okoth.

Timon Juma however sealed Kanga’s victory in the 71st minute of play when he sported a gap in the opponent’s defense and threaded the perfect through ball from mid fielder Peter Brown to beat goal keeper Tobiko peter with a curling left foot effort from a tight angle.

Kanga Coach Dick Obure expressed his elated moment over a good show of play from both teams though full of tension saying they are ready to represent Migori county to the National level.

“We were very prepared this year compared to the other year and we have demonstrated that we can represent the county in the national level. It’s an amazing feeling to win such a team as Koderobara who had a good play all through the games,” said Obure.

Tukjowi won the girls football title by beating the sub-county defending champs Oyugi Ogango by a solitary goal, thanks to Beryl Awuor who scored the all important goal in the 24th minute of play.

Kanga however showed their mighty again in the volleyball boys final after they won the final thriller by thrashing Kanyawanga three sets to two.

Kanga took the first set by 25-21 before Kanyawanga bounced back to narrowly win the second set 25-23.The third and the fourth sets were tensed as both teams exhibited a strong will to win the game as Kanyawanga won the third set 25-18 only for Kanga to claim the fourth set 25-20.

Kanga however capitalized on their superior spiking techniques to win the title in the final set by beating kanyawanga 25-17 before Ogugi Ogango won the volleyball girls by beating Sigiria secondary three sets to nil.25-15, 25-20 and 25-22.