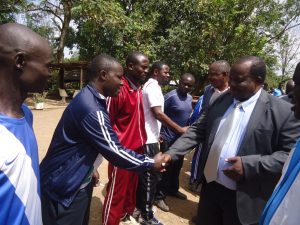 Nationwide league side Isebania FC has challenged governor Okoth Obado to sponsor the team and move with speed to complete the stalled county stadium.

The team was recently promoted from the regional league but they lack the sponsor and the playing field for their home matches.

According to the team chairman David Chacha, the team has never had the playing field of their home matches forcing them to part with Sh10,000 for every game played at Sony Sugar FC home ground Awendo Green Stadium.

Chacha said they used the Kenya Revenue Authority yard in Isebania town which was suddenly renovated forcing them to train at Isebania High School playing ground.

“We don’t have a field forcing us to travel all the way to Awendo which is tiring, this caused us to lose two nil to Ushuru FC recently,” he said.

He said they have survived from support of large fan base in the border town especially Tanzanians, but they have challenges in paying players and staff.

The team’s coach David Musta added they have been forced to hire buses for their home and away matches at Sh10,000 and Sh20,000 respectively.

“We have no credible transport to make us travel easily to honor our games which will make completion of the county stadium and sponsorship a big boost to us,” he said.

The team that has 30 players who will benefit greatly from Migori County Government stalled stadium being finished.

“We need the county Government of Migori to recognize the team and make us their own just like Vihiga FC,” he said.

He said by having their games in populous Migori town, they stand from having short distance covered and more support base.