Hull City shocked the Gunners by taking an early two-goal lead at Wembley before Santi Cazorla scored a magnificent free-kick to halve the deficit going into the break. Laurent Koscielny put Arsenal back on level terms in the second half before Aaron Ramsey completed the turnaround in extra-time.

Arteta feels the experience of their semi-final against Wigan Athletic helped the Gunners keep their nerve and haul their way back into the game.

“The manager’s speech at half-time was brilliant,” the Spaniard told Arsenal Player. “[He told us] to keep believing in how we should do it and keep performing.

“He told us to stay calm. We had done the most difficult thing, which was to score the first one [after going two down] so now the game was open, we had plenty of time to do it, we could not rush it. It was brilliant, I think the lads continued to play and we showed a lot of experience and composure. I’m really happy, it’s a happy day.

“I’m glad overall for the players because they deserve it, for the manager and for the club in general and the fans.”

The victory ended Arsenal’s nine-year wait for a trophy and Arteta thinks it can be a platform for future success.

“This club has got every resource to do better than what we’ve done in the last nine years so hopefully we can build from here,” he said. “We’ve got some young talent with a lot of experience at their age. So to get through these moments is going to be very important for their careers.” 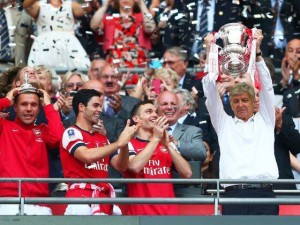