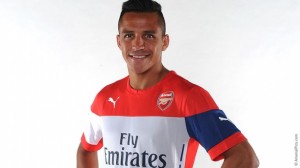 Chile international striker Alexis Sanchez has agreed to join Arsenal Football Club on a long-term contract for an undisclosed fee.

Sanchez, 25, joins Arsenal from Barcelona where he made a total of 88 appearances, scoring 39 goals during his three seasons with the Catalan side.

Regarded as one of the world’s finest talents, Sanchez has just returned from the World Cup in Brazil, where he played an integral role in Chile qualifying from their group (which included the Netherlands, Spain and Australia) and reaching the round of 16. During the tournament, Sanchez scored two goals from his four appearances.

The striker, who has now made 71 appearances for Chile, scoring 24 goals, started his career with Cobreloa, based in Calama in north Chile, where he spent a season before moving to Santiago-based Colo-Colo, where he won the Chilean Primera Division in 2007.

After convincing performances in Chile between 2005 and 2007, Sanchez went on loan to Argentine side River Plate, where he added the Argentinian Primera Division to his honours.

Following his success in South America, Sanchez made a permanent move to Serie A side Udinese in 2008, where he spent three seasons, scoring 20 goals from 95 appearances, before making the move to Barcelona in 2011.

Arsenal manager Arsène Wenger said: “As many people have seen during the World Cup this summer, Alexis is a fantastic footballer and we are delighted that he is joining us at Arsenal Football Club.

“Alexis will add power, creativity and much quality to our squad and we are all looking forward to him joining up with us in a few weeks. He has consistently produced top-quality performances at the highest level for a number of seasons now and we are all excited to see him integrate into the Arsenal squad. I’m sure all Arsenal supporters will join me in welcoming Alexis to our club.”

Sanchez said: “I’m so happy to be joining Arsenal, a club which has a great manager, a fantastic squad of players, huge support around the world and a great stadium in London. I’m looking forward to meeting my new team-mates and to be playing for Arsenal in the Premier League and Champions League. I will give my best to Arsenal and want to make all the supporters happy.”

Sanchez travelled to London Colney on Thursday to complete his medical and will join up with his new team-mates at the end of July, after spending some time on holiday following the World Cup.

It is expected that Sanchez will make his first Arsenal appearance at the Emirates Cup, which takes place at Emirates Stadium on Saturday, August 2 and Sunday, August 3.

A full interview with Alexis will feature soon on Arsenal Player.

Everyone at Arsenal welcomes Alexis to the club and looks forward to seeing him in an Arsenal shirt.

The transfer is subject to the normal regulatory process.