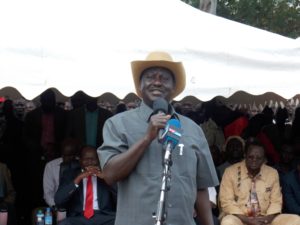 Something is completely wrong with the way you handle Nasa affairs in the Rift. My Bible tells me you cannot put new wine in old wine skins. Isaac Ruto is expected to report back to his masters today. Did you for a moment stop to imagine that he was a trojan horse planted right inside the heart of Nasa?

I have always advised that unless you put up a mechanism for identifying and raising up your own leaders in RV, no amount of grafting with urp will ever work. There is a paralysis in Odm/Nasa whose cure, as it appears to me, seems unavailable.

Yet Nasa has in RV, the staunchest Nasarites in Kenya. As one of them, I can name here an entire network of men and women who have never worshipped William Ruto.

Yet, ODM/Nasa has never seen merit in investing in this movement. If you tried, even for a day, you would see results you have never imagined.

We must not be excited by defections. Some are cosmetic and very costly. Long ago, defectors used to be vetted first. They were put on hold until their real mission was ascertained. They were never allowed anywhere near the driver’s seat.

They would seat with the rest of the passengers until such a time when they graduated. What happened to Odm/Nasa? Why are we too desperate for sons from the other homestead? Don’t we have our own? Can’t we groom those of us who have shown merit, consistency and ability?

This morning, credible reports indicate Isaac Ruto is going back to his masters. I have tried to mourn but it refused to work. He is a homeguard doing what he was assigned to do. He is not a freedom fighter. He is not one of us. He was meant to be like that. He was tasked with strangling the baby as soon as it was born. He was was supposed to ensure that the birth of a new Kenya ended as a still birth. He will be heavily rewarded.

Apparently I feel very strong now. No tears are forthcoming from my eyes. My sleep ended at 3am. What the future holds for this country is what woke me up. I know Nasa has no leadership in RV right now just as it has always been anyway. I know that sabotage, misrepresentation and backstabbing in the order of the day. In the end you may end up with another kanu or urp homeguard to lead us. I shall not celebrate. The results will be the same.

Perhaps now Wilson Sossion and Mercy Chebeni can rise up and do what they were employed to do. There comes a time when advice must be taken seriously.