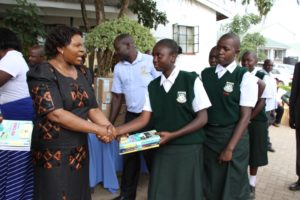 Pro. Suda during the distribution

Education stakeholders have been challenged to improve infrastructure in schools being one of the main requirements for excellent performance in national exams.

The CS noted that the government has planned for every Kenyan child to get education and position in the society.

Professor Suda urged students to up their performance now that the government has provided free text books for chore subjects.

“You must now excel more than you used to as the Government has given you the strength in form of books,” Suda told Kanga Boys High School students during the of the launch of official distribution of books at the school ground on Thursday.

School principal Michael Ogweno asked the parents to cooperate with the teachers to ensure that the students excel more in the future national examinations.

“The parents have been alleviated off the burden of buying books as it has been the norm in most public secondary schools across the country but it is now the chance of the parents and guardians to make sure that they pay fees to enable their students stay in schools,” he said.

The school principal said that the school produced remarkable and good performance at the last year’s Kenya Certificate of Secondary Education as it produced the best student in Nyanza region Brian Ongiri.

The regional education coordinator Richard Chepkawai said the ministry’s distribution and production of books has gone a notch higher to promote education for both the rich and the poor students as it will put them on equal measures to compete each other.

Chepkawai noted that the government is offering full free secondary education in public schools. He said that lunch arrangement in day schools is negotiation between parents and school management.

The books that were distributed by the publishers of Moran publishers, Kenya Literature Bureau and Oxford University Press were the only publishers that provided books to the schools in Migori County.

The schools where the books were commissioned were Kanga High School in Rongo,Kadika Girls High School in Suna East, Moi Nyabohanse Girls and Isebania Boys high school in Kuria West.

The books are expected to be distributed to reach all 248 public secondary schools in Migori County to help the students learn better.