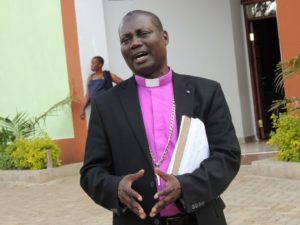 The National PEFA churches Secretary General Bishop John Okinda has asked National Super Alliance Raila Odinga and Jubilee’s Uhuru Kenyatta to come together and dialogue to save the country from the current stalemate.

Bishop Okinda said the country risks taking the 2007/2008 route if the two national leaders do not set aside their differences and hold talks to save the country’s failing unity.

The cleric said that the churches calls for dialogue did not necessarily mean striking a power sharing deal between the two political factions but reaching a compromise that would steer the country to unite.

“Positions can be created but we are not for positions. This is for dialogue the dialogue that will be brought together (sic) and people will come to decide what is good for us,” Okinda said.

He called on NASA and Jubilee to set aside their differences and see the good national dialogue would bring to the country.

The PEFA churches Secretary General said that agreeing to a dialogue did not mean that a party is weak but had the interests of the country at heart.

“There is no one who is weaker or stronger and cannot sit with the other. We are still asking you people (NASA and Jubilee) that this is the time that we need the national dialogue,” he said.

He advised the two party leaders to also consider changing the constitution to bring to an end the current stalemate.

“This constitution is good but if it cannot serve our purposes then it can be changed,” the Secretary General said.

Speaking in Migori town the Bishop called on religious leaders pray for calm to return to the country after skirmishes broke out in parts of the country following the repeat presidential election.

But the cleric called on the government to address the cases of injustice raised across the country as it was difficult to have peace without justice.