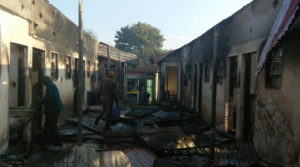 Was the Thursday night inferno that razed down Homa Bay governor Cyprian Awiti and other offices meant to escape anti-corruption sleuths?

Angry residents have started raising questions in bar stool talk and social medias the fire which begun past midnight started at county finance and procurement offices, crucial places for data on corruption which has marred the county.

“The fire came only three days after EACC officials raided the offices confiscating several documents and a number of computers with crucial details. They were to come back and try to unearth Sh5billion corruption scandal,” John Odhiambo, a resident said.

Odhiambo lamented that despite the county buying two fire fighting engines, there was no response.

Homa Bay County Police Commander Marius Tum said one person found at the scene with fuel was arrested as further investigations are on.