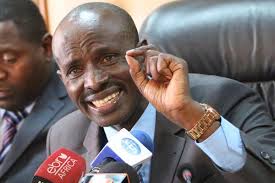 Migori county teachers have accused their union leadership of not fighting for their rights as their beleaguered secretary general and nominated MP Wilson Sossion visited Migori on Sunday.

Teachers’ union top leadership has been put on the spot over the woes affecting the teaching fraternity, in what junior Kenya National Union of teachers (KNUT) officials are now accusing their national office holders.

Nyanza teachers led by Rongo branch chairman Samwel Omwaga said the top leadership of the include Sossion who is in parliament have been silent as policies are forced on members.

“Teachers Service Commission has been introducing unrealistic policies, let the union officials not talk tough and raise our issues in parliament,” Omwaga said.

The unionist said the two teacher unions KUPPET and KNUT should team up together and face the commission head on.
He added that those teachers who were either elected or nominated to parliament should rise to the occasion and bring such bills for deliberations.

“Instead of doing a lot of public relations with teachers, we are asking members of parliament led by Sosion and KUPPET chairman Omboko Milemba to raise to the occasion,” he said.

The meeting was graced by first vice national treasurer James Ndiku who said delocalization policy has led to disintegration of families.

He said the several policies has equally been the source of academic deterioration in schools as teachers spend most of their time filling forms in cyber café. He added that the commission is issuing policies without consultations.