SUNA WEST: Olala tries to kick out Were as SecGen, accused of destroying ODM party 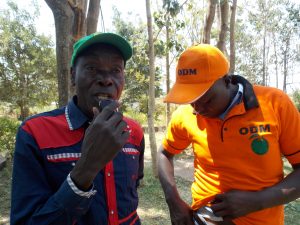 The ugly head of Suna West ODM party politics came out today in an illegal meeting at Legacy Hotel, Bondo Nyironge to try and kick out Secretary General Shem Were.

The meeting was organised by Migori county ODM secretary general Joseph Olala who has been blamed for creating unnecessary confusion in the party over a year after grass root elections.

Today’s meeting, which by the time Migori News left the scene was likely to have Oruba-Ragana ward secretary Abdi Fatah being election was organised by Suna West sub-county ODM chairman Odongo Ragoi.

The two said the meeting was to fill Olala’s post after being promoted to county level. They said they didn’t have any formal communication from party’s headquarters in Orange House.

But Migori county chairman Philip Makabong’o and Were said the election was illegal as apart from Orange House not being aware, there was no returning officers.

They accused Olala of taking sides in Suna West MP politics and creating confusion which can be used by Jubilee moles in the county to cause more havoc.

“Olala and Ragoi know that on July 22 at Orange House they were instructed to respect Were as the secretary general, by organizing the illegal election they are in gross insubordination of party leaders” Makabong’o said.

Were said the two will face “disciplinary action for working with Jubilee moles in Migori county to discredit party leader Raila Odinga.”

“I was not bothered since there is no vacancy for Suna West SecGen which I fully represent,” he said.

On January 26 the ODM tribunal ruled that Were was the Suna West SecGen.