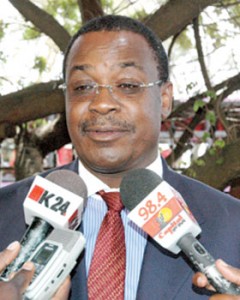 The soft spoken and a likely aspirant for Migori senator seat gets a major boost in the reshuffle which Kidero has said are “In order to enhance service delivery, I have reviewed the functions of my government and re-organised it to give Nairobians better service delivery that will ensure that the capital city remains the city of choice to invest, work and live in,”

Awuonda is yet to aggressively campaign for his bid and is not known beyond a close area in his constituency Suna East.

In the changes which increased the number of dockets from nine to 10, the lands ministry was split into two, with the Urban Planning and Lands docket going to Christopher Khaemba and the Urban Renewal and Housing to Patrick Tom Odongo.

Leah Oyake, who was previously the Environment chief officer, was stripped of the docket and replaced by Christine Ogut, who formerly held the position of Transport chief officer.

During his address at City Hall, Kidero said, “The Environmental docket needs someone who is an engineer in order to deal with the challenges that come with it especially the garbage menace.”

Ms. Oyake had been on the spot several times due to the garbage menace in the city.

Former Health Officer Robert Ayisi was appointed as the acting county secretary, a position which was formerly held by Gregory Mwakanongo also in acting capacity. Assembly members from the Jubilee had claimed that the governor was “wrong for appointing Ayisi as he was marred by integrity issues”.