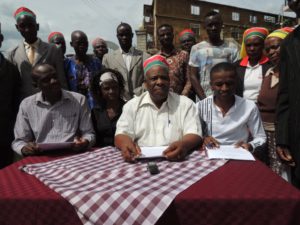 Religious leaders drawn from Western Kenya have vowed to put measures to aid in the fight of child labour during this year’s long holiday.

The leaders drawn from Western, and Nyanza Counties together with local organisations Kenya Alliance for Advancement of Children Rights (KAACR) and RAPADO said children are at the risk of being subjected to child labour owing to the long period that they will be staying at home.

They said the religious sector has a duty towards the success of anti-child labour campaigns and the implementation of child labour laws in Western Kenya.

“Our interventions are critical in the long term goal of eliminating all forms of child labour,” John Oduor of KAACR said.

The group noted that the drivers of child labour in Western Kenya are drawn from all sectors including service, agricultural, industrial and in some instances child prostitution, commercial sex and child trafficking.

Most of these drivers were experienced along the sugar belts both in Nyanza and Western counties, fishing along Lake Victoria and gold mining in Nyatike.

“These activities are harmful and risky for children as they are exposed to dangerous working conditions,” Oduor said.

He added that most of the children worked for longer hours with little or no pay and in most instances had no access to food or water.

Oduor also pointed out high levels of poverty in Western region of Kenya for the prevalence of child labour.

“Orphan-hood, neglect, abandonment and poverty are identified as the main causes for child labour in the region,” he said.

Mwehero said most children were orphaned and their parents badly hurt and could not provide for their families driving children to engage in active labour.

The Bishop however said that they had plans to take children to school as that had proven effecting at ending child labour.

“Focusing on all forms of labour in an area and getting them into full time education has shown more effective,” Bishop Mwehero said.

This he said was in line with their initiative themed, ‘No to child labour, Yes to Education.’

He said that a child engaging in labour was disadvantageous to adults as it “took away their labour and depressed their wages.”