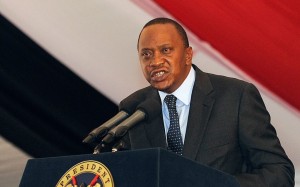 President Uhuru Kenyatta has broken his silence on the ongoing demolition of structures built on riparian land in Nairobi.

In a shocking speech, Kenyatta revealed that the exercise that’s taking place in parts of Nairobi had made him lose his friends.

Within the last week, several structures built on riparian land have been demolished with several others lined up to be brought down.

According to the President, many had called him wondering why their property was being ‘destroyed’ and he was doing nothing about it.

“I’ve been asked how do you just sit there and watch this destruction. You must stop it,” President Kenyatta said.

But Kenyatta said his hands are tied regarding the destruction.

“It’s is difficult to stop not because we love to destroy, but because we must fight impunity,” President Kenyatta said.

Kenyatta said no one, regardless if their status, will be spared in the governments fight against corruption.

The President said Kenya’s progress is dependent on the success in the fight against impunity.

Meanwhile with the President’s blessing, the country will be watching which buildings will be brought down this coming week.

The demolition exercise has been applauded by citizens with many on social media offering to fuel the bulldozers.

In the same breath, Nairobi Governor Mike Sonko had vowed to repossess all government land grabbed by individuals as he visited some of the said sites.