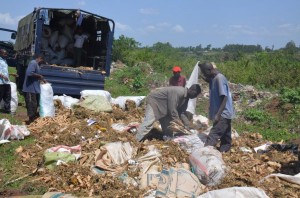 Migori police on Friday destroyed bhang worth Sh100million at Lichota town in the outskirts of Migori town after being given a court order to do so.

The order was issued after the 3,999 bhang was used as evidence in court with another haul worth almost Sh200million expected to be burnt this week.

The haul amounting to Sh300million was impounded with six months which exposes Migori county has a major route for bhang grown in Tanzania entering the country.

Migori close proximity to Tanzania, porous border and poor police presence has seen the county being used to transport bhang grown cheaply and in large scale from Tanzania to all the way to Nairobi and Mombasa.

Opiyo said that due to help from residents who have always notified police bhang traffickers have avoided roads with police road blocks and chosen dirt roads to ply their illegal trade.

County CID director Violet Makhanu said that the drugs have been destroyed after prosecuting 20 suspects involved in bhang trafficking with most of the suspects out on bail.