Notice: Undefined offset: 2 in /home/absalogi/public_html/wp-content/plugins/visitors-online/visitors-online.php on line 438
 PICTURES: I was shot at twice, my life is in danger- Clement Ayungo | Migori News

PICTURES: I was shot at twice, my life is in danger- Clement Ayungo 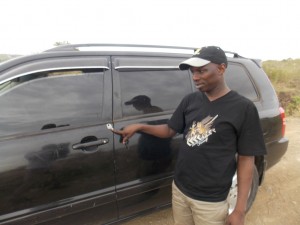 Clement Ayungo the National Youth Council chairman and Ruaraka who hails from Sori, Nyatike has said his life is in danger.

Ayungo said he was shot at twice two weeks ago and his house Nairobi home attacked by gangsters.

The two bullets went through and were recovered in the vehicles as the gangsters shot through at the passenger’s door.

“A bullet shuttered a mobile phone belonging to a colleague Roy Kobwanga. Nobody and non-arrested during the attack,” Ayungo said.

Ayungo told Migori News from Sori on Sunday that he has reported both cases at Embakasi police station and blamed Ruaraka MP Tom Kajwang for his troubles.

“The attacks are tied to my ambitions to be the next Ruaraka MP. I know Kajwang’ is behind my woes by trying to intimidate me against vying for the seat,” he said.

He vowed to continue to campaign to the ballot and will ensure sanitation is improved if elected.

“Over 70 per cent of Ruaraka is taken up by informal settlement whose main problem is poor sanitation which I will work hard to address,” he said.