Notice: Undefined offset: 2 in /home/absalogi/public_html/wp-content/plugins/visitors-online/visitors-online.php on line 438
 Obado, Ruto declare to work together ahead of 2022 to hit Raila, ODM in South Nyanza | Migori News

Obado, Ruto declare to work together ahead of 2022 to hit Raila, ODM in South Nyanza 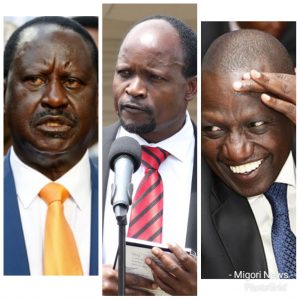 It is now official, Deputy President William Ruto and Migori governor Okoth Obado will work closely ahead of 2022, a move which will undermine Raila Odinga and ODM in Nyanza region.

The two declared to work today when they spoke at Kendege in Kuria East in Migori County on Saturday where they were on another tour after the one on Monday.

Ruto maintained that he is ready to work with Obado the same way “President Uhuru Kenyatta and Odinga have decided to bury the hatchet and work together and that is why I am visiting all parts of the country including Migori to spread development,”

“Is there a problem if I worked with governor Okoth Obado? I will continue to walk with him in delivering development to our people. I will not mind what will be said of our closeness,” he said.

READ MORE: Obado can campaign for his Dalmas, we will meet in Migori- Raila

Obado hinted at a political union with the DP calling Raila a crocodile who was out to eat him alive.

“I would like you to condemn this so called crocodile,  which some people wanted me to be swallowed with. Let us not allow this crocodile to eat us up,” he said.

“I am ready to work with the DP now and in future,” said governor Obado.

Masara skipped Ruto’s Monday tour, and turned up for the meeting after he was scared off by his political rival, former MP Joseph Ndiege.