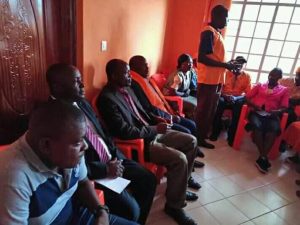 The Orange Democratic Movement has given Migori Gov. Okoth Obado a political blow by terming his meeting with party delegates as illegal.

Obado on Monday held a meeting with delegates from across the county at an office in Number area he had donated to the part, but was rejected by the party.

READ MORE: Obado, Ruto declare to work together ahead of 2022 to hit Raila, ODM in South Nyanza

“ODM has not held any DELEGATES meeting in Migori as is being purported,” the party said on official Facebook and Twitter handles.

Within a month, Obado hosted Deputy President William Ruto twice in Migori and said they will work together.

Obado, who is currently struggling with a lot of court cases, has seen his supporters and family blame ODM leader Raila Odinga of being behind his woes.

The team, has claimed to be be the bonafide party leaders in Migori.

“The bonafide officials in Migori County led by Chairman Philip Makabong’o & Secretary Jossy Olala are the ones mandated to organize such meetings in consultation with the Party Headquarters,” the party stated, throwing more cold water to Obado.

READ MORE: Makabong’o gives MCAs 2 weeks to impeach Obado, or ODM will force them to

The party finished by insisting any Delegates meeting held today in Migori is “therefore not an ODM Party event. It is not recognized by the Party leadership and the National Secretariat.”

After the meeting Obado left the offices without talking to the press, but Nyambori and Mapesa took a swipe at Makabong’o’s team for trying to expel them and Obado from the party.

“We have written a letter to the national office seeking their removal and are still waiting for response.” Nyambori said.

READ MORE: Obado should step aside after getting Sh5m bail- Makabong’o

“In fact Makabongo has no grounds to send off anybody from the party because he has no capacity in ODM,” he claimed.