Notice: Undefined offset: 2 in /home/absalogi/public_html/wp-content/plugins/visitors-online/visitors-online.php on line 438
 Obado: If MPs need me in a meeting they should come to Migori | Migori News

Obado: If MPs need me in a meeting they should come to Migori 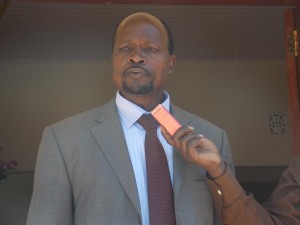 Migori Governor Okoth Obado addressing a function at his office in Migori town yesterday. He said he wont meet MPs in Nairobi..

Governor Okoth Obado has said he will not honour an invite by Migori legislators for a Nairobi meeting next week to mend fences between them.

Obado said if the legislators needed any meeting they should come to his office in Migori town and not in Nairobi.
While speaking during an event at his office he said the Nairobi meeting was baseless.

“I will not attend any meeting in Nairobi, what is the need of going to Nairobi when we can meet in Migori and discuss everything and solve any matter?” posed Obado.

He insisted his office was the ideal location for any meeting.

“The office of the Governor is geographically situated in Migori, if they want to meet the governor then they are free to walk in any time they want, not calling me to Nairobi,” he said.

Last week MPs in a meeting in Nairobi agreed to invite the governor in Nairobi after they successfully held a county meeting on December 6, 2013 at Obado’s meeting and met MCAs.

The next meeting between the leaders was to be scheduled in Nairobi but supremacy war between leaders had seen cold water thrown in plans.

Legislators planned the meeting to end bad blood between county and national leaders.

“We want to seek ways of working together as elected leaders and iron out the frosty relations between national and county leaders,” Uriri MP John Kobado and secretary of the PG said.

Speaking to Migori News, Kobado said the meeting will also usher another meeting between MCAS and MPs.

“We seek to ensure we don’t duplicate development agendas,” he said.

Rongo MP Dalmas Otieno was away in Juba for peace effort in South Sudan while Shadrack Manga (Kuria East) and Dennitah Ghati (Women Representatives) were absent with apologies.

But Obado insisted he has been working closely with legislators.

“I have no problem with the MPs, there are a few who are driven by self-interests and they have got no agenda for the public,” he noted.