Nyanza won’t be discriminated upon- Ruto 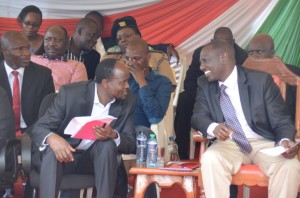 Deputy President William Ruto has moved in to assure Nyanza voters that the Jubilee government would develop all parts of Kenya irrespective of tribe or political affiliation.

Mr Ruto, who was visiting Migori County for the first time since his election as the deputy president called on the people to support the Jubilee administration and sought to allay fears that the region would be ignored by the Jubilee government.

“You have no apologies to make over the way you voted  because that was your democratic right,” he said adding that both President Uhuru Kenyatta him were  determined to change the face of Kenya through a grand development programme that targets all counties in the country.

He further urged the regional leaders to ignore party loyalty and cooperate for development.

Mr Ruto said that President Kenyatta would make an extensive tour of Luo Nyanza in January to assure residents that they are part of the government.

“We do not want to align our people on  tribal or political affiliations,to be elected is one part but to deliver on development is true leadership,” he said

The deputy president  further challenged leaders from Nyanza to address

The Deputy President  said these when he presided over a fundraiser in aid of Ranen Seventh Day Adventist Church’s media centre and radio station project.

Speaking at the same function, Migori County  Governor Zachary Okoth Obado, pledged that he would continue cooperating with all elected leaders for the sake of development in the area.

“We have to work together with everybody if we are to develop the region,” he said adding that the time for politics was over and what people wanted now was development.

The governor further called on the discontinuation of the cases facing Kenyatta and Ruto in The Hague for lack of merit.

“Let the cases be dropped and the two be allowed to concentrate in leading Kenya.” Obado added.

The fundraiser was also attended by Senators Charles Keter and Wilfred Machage, Rongo MP Dalmas Otieno among other leaders.

13 thoughts on “Nyanza won’t be discriminated upon- Ruto”