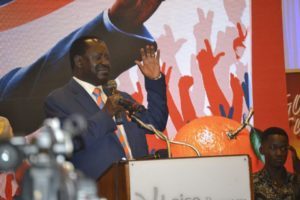 The National Super Alliance (NASA) planning committee have chosen Ruaraka MP Tom Kajwang’ as their replacement of Chief Justice David Maraga during the swearing in ceremony.
Kajwang’, who is an advocate wore official court attire when he arrived at Uhuru Park in Nairobi for the ceremony amid wild cheers.
READ ALSO: Be calm, i am heading to Uhuru Park for swearing in- Raila to supporters
He is expected to swear NASA leader Raila Odinga and his deputy Kalonzo Musyoka as president and deputy respectively,
Kajwang laughed off threats that they would be charged with treason saying already a team of lawyers is out to defend the move.
The vocal opposition legislator told press that he was excited and honored to be given the task of administering the oath.
READ ALSO: We are optimistic Raila will be sworn in- Migori residents

One thought on “MP TJ Kajwang’ to play a Maraga, swear Raila at Uhuru Park”