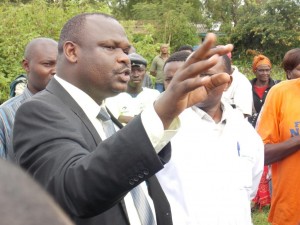 He said Bomet governor Isaac Rutto and Baringo Senator Gideon Moi in Rift Valley home turf are wishing for him to be jailed by The Hague based court to create political room in the region.

He vouched for Ruto to win the case and said the DP respects the rule of law by diligently attending all court proceedings.

He warned the rebellion was working against URP because “as a party we have been working hard to sell URP nationally and the rebellion by some of our members in Rift Valley have been hurting out image,” he said.

He added: “Kenyans facing criminal charges at ICC are innocent. Our President was set free including other suspects; we believe the truth will be set free,”

He said the lack of witnesses was a clear indication that the case facing Ruto was politically driven and fixed by individuals.

He warned rebels that they risk being thrown into political waster bin in next elections as Jubilee Alliance Party will sweep back to power.

“I assure the rebels the day DP Rutto will be set free is the same day they should start writing their political obituaries,” he said.

He was speaking to Migori News over the phone today.