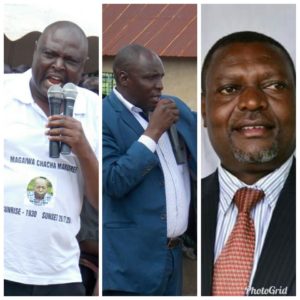 The aspirants and leaders from the minority community said they will use the 86,000 vote bloc to upset orange candidate and through a candidate from the Kuria community.

Tyson Kemege, who vied as deputy governor in the last elections said the Raila should know that Migori is not like Homa Bay where an elective seat is inherited.

“Okello family trying to impose an heir should know that in Homa Bay the Kajwang’s had their way, in Migori Kuria will have their say in a loud and clear voice,” Kemege said.

He said already elders and leaders from the community are watching keenly for development before the seat is declared vacant.

Kuria has John Magaiwa and Solomon Hodo who had vied for the seat before in 2013 and 2017 respectively.

The third is Matiko Bohoko, who told Migori News that he will seek ODM direct nominations for being from Kuria and loyal to Raila.

He vied twice and lost the Kuria West parliamentary seat in 2013 and 2017 general elections on ODM ticket.

Hodo and Magaiwa, said since they were rigged out in last polls in ODM nominations they will seek other party tickets and ensure they are in ballot.

The two said they are still consulting elders from Kuria and watching the nominations process keenly.

“We know that ODM party and Raila will hold sway most of the Luo votes, but as a community we will ensure we vote as a bloc and upset the party candidate or have our own as senator,” Magaiwa said.

Currently the Kuria community has 86,211 votes (Kuria West 51,057 and Kuria East 35,154) which make the community to be key factor in county politics.

6 thoughts on “Kuria will not allow Raila, ODM to handpick next Migori senator- three Kuria aspirants”