Notice: Undefined offset: 2 in /home/absalogi/public_html/wp-content/plugins/visitors-online/visitors-online.php on line 438
 #KCSE2017 Ongiri was index 10 at Kanga, wondered why he was no.6 nationally | Migori News

#KCSE2017 Ongiri was index 10 at Kanga, wondered why he was no.6 nationally 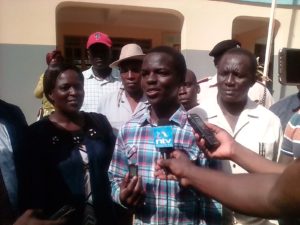 The sixth best national overall in KCSE 2017 Brian Ongiri Onkundi was index 10 at Kanga School and was shocked to top in Nyanza.

Brian scored A plain with 83 points emerging top of 296 candidate who sat examinations at Kanga.

He was watching the results live at their home in Kisii town when he heard his name on live television.

He rushed to the school afterwards accompanied by his parents Joseph Onkundi Nyang’era and Agnes Nyakerario Onkundi to celebrate his victory.

The 17 year old wants to be a neurosurgeon.

The third born in a family of six said he following on the steps of his two elder brothers who graduated in universities.

“I thank God for giving me wisdom to obtain the grade, fellow students should be thankful to their parents for denying themselves luxuries to educate them,” he said.

The Principal Michael Gweno expressed gratitude saying the excellence performance was as a results of dedication from the teaching fraternity and students who never bothered with political situation in the country.

The community led by Naphtali Omolo and Phillip Makabong’o expressed satisfaction describing Kanga teachers as hardworking and dedicated that has enabled Kanga to remain top performing school in Migori Country ever since inception in early 1980’s.

VIDEO OF THE DAY