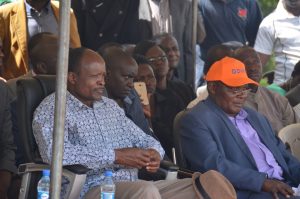 Migori Governor Okoth Obado has directed Independent Electoral and Boundaries Commission to respect the wish of NASA followers and leave their strongholds.

Obado said IEBC was provoking the public by insisting on holding trainings and election in NASA areas.

He said IEBC was also risking the life of its staff members who were holed up in trainings in different parts of Nyanza and Western.

The governor warned that elections will not take part in Migori County on October 26 unless IEBC agrees with Raila Odinga’s terms.

“Majority of us in Nyanza and other opposition stronghold don’t want election and according to democracy we will have our way by first telling the commission to have their training elsewhere,” Obado said.

He added, “We are not ready to participate in the forthcoming election, let not IEBC provoke use by forcing us to participate by having those trainings,” he said.

Meeting organised by IEBC to train a number of IEBC staff were disrupted in Rongo and Awendo with police being forced to fire in the air to disperse youth who were planning to storm a similar training in Migori town.

The Migori boss also condemned the excessive use of power by police to disperse NASA demonstrators.

“Police should stay in stations and stop harassing youths who are out constitutionally engage their rights, Migori people are peaceful and should not be provoked,” he said.

He was speaking at Ombo hospital after visiting victims of police brutality from Friday last week’s demonstrations that left scores with bullet wounds.