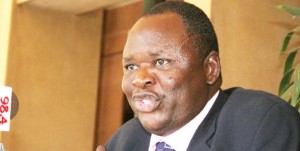 Trouble is brewing in Homa Bay county after ODM delegates threw out senator Otieno Kajwang’ as the county chairman.

Kajwang was replaced with former Rangwe MP Martin Otieno Ogindo, after delegates unanimously voted him out.

Ogindo was the party’s Vice chairman in Homa Bay earlier before he moved to Federal Party of Kenya (FPK) during last general elections.

Charles Ongondo Were, who contested the Kasipul parliamentary seat on Tip Tip after being locked out in ODM nominations also replaced Vice chairman Monica Amolo.

The delegates said they had taken the decision to revitalise the party and proposed more changes to make the party stronger in the grassroots.

But Amolo disputed the change saying it was inconsequential and done without due procedure. She said the move was orchestrated by ‘Kalausi’ party. She maintained that Kajwang was the branch chairman and she was his deputy.

“Those behind the said coup are well known. Whatever they have done is null and void and I wondered who at the Orange House will dare receive documents of their alleged ouster from office”, she said.

The delegates made the changes in a meeting that took place on Sunday at the Homa Bay Farmers Training Centre.

The delegates also charged that since Senator Kajwang had declared interest on the party’s national vice chairman’s position, he has no business clinging on the post of chairman.