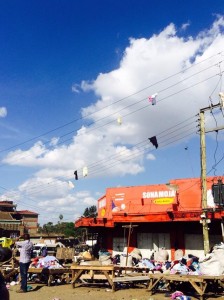 Section of Gikomba market in Nairobi. PHOTO:@robynleekriel on Twitter

Over ten people have been killed and several injured in a multiple explosions at the popular Gikomba market in Nairobi.

So far over 70 people have been injured as reports indicate that the first explosion went off in a 14 seater matatu and while the second blast was within the Gikomba market.

Already President Uhuru Kenyatta has passed his sympathy message to those who have been affected by the blast.
The first blast was directed at a public transport mini-van. The Centre reports that the second explosion went off in the market creating panic and closing businesses.

Casualties are being rushed to nearby hospitals with many being in critical condition.

Benson Kibue, Nairobi Chief of Police said to the media, “There are explosions in the area and we are yet to know the cause. But witnesses say there are injuries”.

Spokesperson for the Kenyatta Hospital, Simon Ithea, says that the hospital is in need of blood.

This attack follows a recent notice from the foreign office, warning of impending Al-Shabaab attacks.