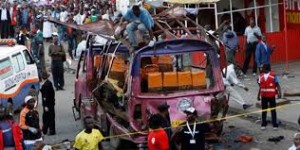 Addressing the press today the church and state relationship chairman in South Nyanza region Rev George Omollo said the operation in hot spot areas should be replicated in all counties.

“We raised concern over increased attack on church members during worship and we support the operation which will help root out terrorists in our country,@ he said.

He said recent terror attacks has made the country insecure and urged all Kenyans to be on alert and support police by reporting suspects.

“Government should set up anti-terror police units in all 47 counties and employ more police officers to help the counties fight against terrorism in the country,” he said.

“Our border immigration officers should be honest by not allowing aliens to derail the peace we have in our country,” he said