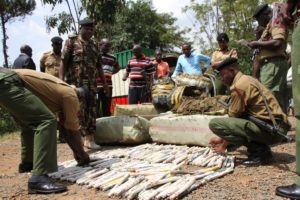 Police in Migori have vowed to intensify war on bhang after they impounded bhang worth five million on Tuesday.

Mukanda said the 5 million was just an estimation on face value but the value of the bhang could be more.

He said the police had received information from members of the public about the vehicle leading to the setup of the road block.

“We got information about the trafficking from Tanzania through Serengeti to Ikerege in Kenya then through Migori town,” Mukanda said.

The County AP commandant said the Toyota Probox KCE 043H was spotted in Ikerege in Kuria West Sub County where it was monitored before a chase ensued.

“We gave a chase from Namba Juction in the outskirts of Migori town, to Masara then Nyatike,” the AP commander said.

He added, “Nyatike roads being majorly rough roads and our vehicles being better equipped for the terrain,  the driver and another man who were in the vehicle abandoned their vehicle and disappeared,” Mukanda said.

The   AP boss said during the chase, the drive of the Toyota Probox lost control and hit a woman by the name Rosemary.

“The woman was rushed to Migori Referral hospital but as we speak, we have received information that she has been treated and discharged,” he said.

In the vehicle the police found a print out of a Global Positioning System (GPS) map with the path the drivers were to use clearly mapped out.

“The map shows that this consignment was headed for Meru through Migori from Tanzania,” Mukanda said.

He said they had initiated investigations to identify the owner of the vehicle and the consignment.

Migori County commissioner Joseph Rotich said police had put in mechanisms to deal with anybody found dealing in illegal activity.

“We are also conducting raids on illicit brew and illegal gaming joints and we will fight so that our children get a conducive environment for growing up,” Rotich said.

Rotich asked members of the public to cooperate with the police in fighting illegal activities.