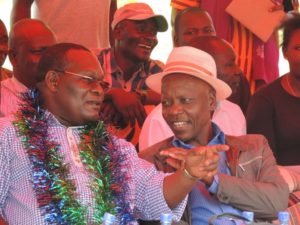 Last Friday the two leaders met in Harambee House, Nairobi and held a joint press statement which sought to end their political adversity.

Immediate former Nyatike MP Edick Anyanga and former Uriri legislator John Kobado Today on Friday said the meeting, with Raila being the pillar of the Luo nation will bring healing in the area.

The two said the step taken by two leaders will help bring development in Nyanza, only if the two leaders stay put together on the course of their meeting.

“I challenge Raila to stay on course with the agenda of the meeting to bring peace and recognise Uhuru presidency which was confirmed by all constitutional bodies,” Anyanga said.

Anyanga said it will be unfortunate for Kenyans and the Luo community if Raila goes against the promise of the country.

“We can’t have the whole community and parts of the country not recognising the presidency when other places are developing. In Nyatike we are in a process of welcoming the president and his deputy for a tour,” Anyanga said.

Kobado said the Friday move will put into rest politicians from the Luo community who have been branded as ‘Jubilee moles’ for working closely with the government after August 8 elections.

“The Friday meeting sends a clear signal to the Luo community to think development by working closely with the government and recognising Uhuru as the president,” Kobado said.

Nyatike constituency elders Oyier Lago and John Okombo said the Luo community was tired of politics of destruction and should work closely with all elected leaders and strategise for the 2022 elections.

William Odhil, the Migori county ODM deputy chairman said the Friday meeting should be reciprocated in delevlopemt tour by the presidency in the area.

Denis Nyarangi and James Mwangi, officials from the Office of the president said they will ensure the president and his deputy visit Nyatike constituency to tackle challenges of gold mining, squatters and row over Migingo Island.

“We will ensure we end the animosity between Luo and Kikuyu communities by having the presidents visit the Nyatike,” Mwangi said.

The leaders were speaking on Friday at Nalo Primary School in Nyatike constituency to celebrate the school for emerging as third best in the constituency during last year KCPE examinations with a 323.81 mean score..

The school was started in 2012 with only 7 pupils before the population jumped to current 720 learners with a total of 8 TSC teachers.